According to Lotus, out-and-out performance is no longer enough for buyers looking for an Elise. Die-hard fans love the agile two-seater as it is, but to widen the car's appeal and improve sales, something drastic had to be done. As a result, the Elise has gone upmarket. 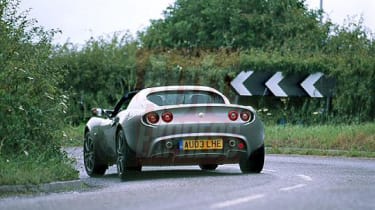 Using a Lotus Elise as your everyday transport has now become a practical proposition. The roadster's driving dynamics remain undimmed and the comfort level for occupants has increased. But the Lotus is still more expensive than a similarly specified Vauxhall VX220 Turbo.

According to Lotus, out-and-out performance is no longer enough for buyers looking for an Elise. Die-hard fans love the agile two-seater as it is, but to widen the car's appeal and improve sales, something drastic had to be done. As a result, the Elise has gone upmarket.

Being dragged into the 21st century has been traumatic for the original no-frills car. After all, it has taken Lotus seven years to fit carpets and soundproofing as standard, so imagine the shock of adding a central locking system and electric windows.

The Norfolk-based firm says the effort has been worth it, and it expects customers to react positively. However, we wondered if the upgrades would spoil the Elise driving experience, and got behind the wheel of one of the first top-spec cars off the assembly line to find out. The vehicle - a 2004 model year 111S costing £27,995 - looks identical to the machine it replaces. The one cosmetic difference is a new badge on the roll cage cover.

Bigger changes can be seen inside, where the upgraded cabin has revised door trim and a wider choice of fabrics. Although the switchgear is the same as before, Lotus has moved the windscreen washer reservoir to make routine maintenance easier. But the main improvement is the added luxuries and the gains they offer for owners using the car on a daily basis. Central locking allows the driver and passenger to get in at the same time, while power windows mean you don't have to scrabble around in the footwell to wind down the glass. What's more, extra soundproofing and full carpeting ensure that long journeys are no longer so tiresome.

There's less clatter from stones hitting the underside than before, too, and cabin noise is mainly caused by wind flowing over the canvas top. Sun visors have also been added and there's a large storage net behind the seats.

Buyers can also specify optional air-conditioning for the first time, but this might seem unnecessary in a car that probably spends more time than most with the roof off. Keen drivers will be pleased to learn that the latest Elise is as sharp on the road as ever, despite the weight penalty of the extras. The 158bhp 1.8-litre VVC engine from MG Rover loves to be revved hard to help get the best from it, and a red change-up light in the rev counter indicates when to shift gear. Not only does this maximise performance, it also helps the driver to swap cogs just before the rev limiter comes in at 7,200rpm.

Handling remains unsurpassed, and the car offers positive, precise steering, plus a supple ride. Better still, the Elise is now able to get on terms with its recently improved rival, the £25,500 Vauxhall VX220 Turbo. By offering a comfort version, Lotus has matched the appeal of the VX, even if it can't quite beat its price. Choosing between the two has become harder again.