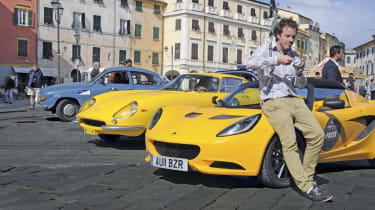 When a car is as light and agile as the standard Elise, stripping 24kg from the kerbweight makes little tangible difference. But with a raft of bigger, more expensive Lotuses on the way from 2013, it proves that the Brit firm hasn’t forgotten its founding philosophy of performance through light weight. It also presents the Elise in its purest form – allowing you to focus on the sensational driving experience. The Club Racer is not only the cheapest model in the Elise range, it’s also the best.

We’ve got over 600km to cover in two-and-a-half days on narrow, winding roads – and within two minutes of setting off, we’re lost. The challenge that faces us is the Terre di Canossa, a classic car rally that weaves its way through the Italian countryside.

But rather than driving something old, we’re tackling the route in the new Lotus Elise Club Racer – a model that doesn’t even have sat-nav on the options list.

The Club Racer is the car that proves Lotus is still serious about keeping weight to a minimum. It’s a stripped-out version of the already featherweight entry-level Elise, weighing only 852kg – 24kg less than the standard car. Our trip begins and ends in the town of Reggio Emilia, stopping off in La Spezia and Parma along the way. How will our no-frills roadster fare on the cross-country dash?

Painted in bright Saffron Yellow – one of six available colours – our car proves popular with the locals, who all want to take pictures and try out the driver’s seat for size. Besides the CR badging, there are a number of giveaways that this Elise is far from standard. The body-coloured seats add flair to the otherwise spartan interior. There’s no air-con or stereo and, for the first time on an Elise, there’s a button marked Sport, which activates an intermediate setting for the stability control, somewhere between on and off.

Other weight-saving measures include the use of a smaller motorsport-derived battery and the removal of noise insulation. Despite shedding 24kg, performance is unchanged, as are the car’s CO2 emissions and fuel economy. The key is the small-capacity 1.6-litre Toyota engine behind the occupant’s head, which produces only 134bhp but delivers a power-to-weight ratio greater than the 200bhp Peugeot RCZ. Even more impressive than its straight-line pace is the speed the Elise carries through corners – an ideal attribute on the twisting Italian back roads we need to negotiate.

The steering is full of feedback – feeling light just off centre, but quickly loading up as the speed and steering angle increases. With every bend your confidence grows, allowing you to use the brakes less and trust the natural grip and balance of the car. Soon we’re leaving other bigger-engined competitors, such as a rare Lamborghini Espada and Maserati Mistral Spyder, in our wake. Equally as astonishing is how comfortable the CR proves to be. The Eibach springs and Bilstein dampers have been tuned for a sportier drive, but even on potholed stretches of road, the bumps shake you around rather than sending jolts through the cabin.

On smoother surfaces, the suspension flows beautifully with the contours of the road. Even the thinly padded skeletal seats provide support in all the right spaces, and left us feeling refreshed at the end of each day.

We were expecting to feel battered and bruised after completing the rally, beaten into submission by the CR’s hardcore character. Yet the opposite is true; we could do it all over again. The lack of storage space limits the Elise’s long-range potential, but for a fast cross-country dash, there are few cars more enjoyable.

And at £27,500, the Club Racer provides a more affordable entry point to Lotus ownership, which can only be a good thing.

Rival: Mazda MX-5THE MX-5 first made the two-seater roadster accessible to the masses over 20 years ago. Available with either a fabric roof or folding hard-top, it’s more usable on a daily basis than the Elise, but it’s still incredible fun.