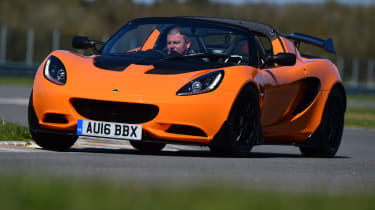 The fastest-ever Elise is expensive, sure, but for those who fully appreciate what driving is all about, there is nothing quite like the Cup 250. This Lotus is a proper road-legal track-day weapon – a car that you happily endure on your way to a circuit in order to relish what it can do upon arrival. And when you do get there, it’ll no doubt demolish pretty much anything that turns up this side of 500bhp. It might not be to all tastes, but the committed few will find the Cup 250 perfect for their needs.

The Lotus Elise Cup 250 is the fastest roadgoing Elise ever made. The 250 in its name doesn’t refer to its power output (243bhp at 7,200rpm), but instead to its torque figure. This particular Elise has a whopping 250Nm of twisting action, available between 3,500-5,000rpm.

That means it has a range of performance that, so far, no other Elise has got near. ‘Focused minimalism’ is the phrase coined by marketeers to describe the intent behind this thundering new range-topper, and for once, the hyperbole fits the product perfectly.

Also new are a set of super-sticky Yokohama track-day tyres that are still perfectly usable on conventional roads. With this rubber fitted, the 1.8-litre Cup 250 has managed to lap the Lotus test track only a couple of seconds slower than the far more powerful and more expensive Evora 400. And that’s because it has the grip, balance and composure to go with its new-found straight-line pace.

As you’d expect, the Elise makes a great track-day companion, with huge precision and a range of limits that require true skill and commitment to fully unlock. The brakes are also excellent, offering bags of feel through the middle pedal.

The extra torque is where the newcomer really distances itself from the old model, though. It pulls the Cup 250 along with much more energy at low revs, and when the power kicks in, you’re left with a seamless burst of acceleration in each and every gear. Switch the little gearlever up to the next ratio, and you can do it all over again – smiling every inch of the way. 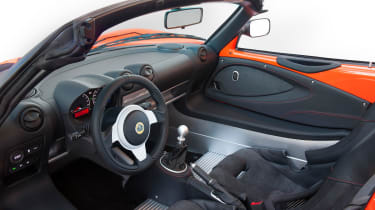 On the road, the Lotus is surprisingly civilised, even though its interior has been stripped right back to the bare bones in order to save weight. There’s no stereo and the footwell doesn’t feature any carpet in true back-to-basics style. The Elise rides relatively well despite its stiffened suspension, and the unassisted steering remains a thing of wonder – providing more feel than you’ll find in just about any other car on the market.

However, such mighty ability on road and track doesn’t come cheap. In standard trim, the Cup 250 costs £45,600, but add the Carbon Pack, and the price rises to just shy of £50,000. That puts the Elise into Porsche Boxster territory, at which point you begin to wonder how many people will take the plunge, no matter how good it is to drive.

The truth is, though, the Elise is a different prospect to a Porsche. It’s so much more focused toward the driving enthusiast – one doubts whether anyone thinking of buying one would seriously consider an alternative.