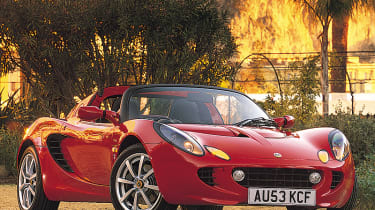 Driving: Lotus offers a choice of two Toyota engines with the Elise - a 134bhp version from the Corolla, with 134bhp, and a 189bhp unit boasting variable valve timing. The former is smooth and linear, but with the VVTi-L powerplant, there's a distinct shove at 6,200rpm as the car enters the fun zone. However, actually keeping the engine in this narrow band before you hit the limiter is quite difficult and requires concentration. For road use, the 134bhp standard unit is a better companion. At least the low kerbweight means either engine is responsive pretty much anywhere in its rev range. Pace is electric, with 60mph arriving in 5.4 seconds in the faster model, though even the standard car does it in less than six seconds. A slick gearchange is a big help, as is well-honed ABS. And the Elise, with shared suspension settings for both, handle terrifically, with massive amounts of grip and steering feel. In fact, the steering remains one of the highlights, as it's so direct and communicative. But the biggest advances in recent times have been made in the ride and handling department, as the compromise between the two is now better than ever. Long journeys are bearable, even if wind noise is intrusive at high speed.

Marketplace: The swooping headlights, menacing front grille and numerous cooling ducts of the MkII Elise have helped it become a huge hit. The design remains modern and attractive, even if the rear is a little fussy. And buying a Lotus needn't mean skimping on luxuries either, as the options list includes full leather trim, air con and a digital radio. Two models are offered, the 134bhp S and the 189bhp R - though both models look the same, even down to the wheels. With the S, Lotus has given itself a rival to the Mazda MX-5 and BMW Z4, while Porsche's Boxster offers more comfort but just as pure handling.

Owning: Swathes of Alcantara across the dash, and an abundance of aluminium, help the Elise's interior send out all the right messages. The excitement starts well before you turn the key; the seating position is spot-on (even though the tiny steering wheel doesn't adjust for rake or reach) and the seats are surprisingly comfortable; 2006 saw a new orthopaedic design introduced, although with the chairs positioned so close together, larger people will rub shoulders with one another. Practicality isn't an Elise strong point, but there are a couple of places for mobile phones and the like, as well as a useful storage rail under the dash. Load space is still woefully poor though, with a mere 112 litres. Servicing will be costly and frequent, while the car's specialised, high-performance nature will make insurance costly. The two-year warranty is mean as well, though the efficient Toyota engines are reasonably good on fuel. But what's most impressive is how solid the Elise now feels. With no rattles or shakes, it seems as though Lotus has finally ironed out its build quality glitches.