Updated entry-level Elise get new 1.6-litre engine, and ultra-low emissions, but does it still set the handling benchmark? 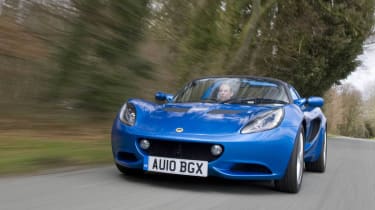 With a 21 and 17 per cent improvement in fuel economy and CO2 emissions compared to the outgoing Elise S, this car marks a huge leap forward for Lotus. The new 1.6-litre engine feels marginally smoother and more eager to rev than the 1.8-litre unit, and thanks to a kerbweight of just 876kg it provides plenty of performance for not much power. The only problem is its subastantial £27,450 price tag, and that’s before any options have been added. But with its light weight, low emissions and sensational handling, the new Elise is more relevant than ever.

Can a sports car really be as green as a supermini? If the figures for the 2011 Lotus Elise are to be believed, the answer is yes! Thanks to an all-new engine and aerodynamic tweaks, Lotus claims the entry-level Elise is now the least polluting high-performance sports car in the world – and it should be every bit as good to drive.

The biggest contributor is an all-new Toyota-sourced 134bhp 1.6-litre engine, replacing the current 1.8-litre unit with the same power output. Besides being smaller in size, it also uses Toyota’s dual VVT-I valve-timing technology to maximise the engine’s efficiency. Power is fed to the rear wheels via a precise new six-speed manual gearbox, offering drivers a much longer and more efficient final ratio.

Maximum torque arrives at 6,800rpm, while the rev-limiter sits at 7,000rpm, so if you want to discover the engine’s full potential using the entire rev-range is a must. Throttle response is crisp from anything above 2,000rpm, and the engine kicks again taking on a more savage note beyond 5,000rpm, although the acceleration never feels intimidating. Under the skin the bonded and extruded aluminium chassis, weighing in at only 68kg, is carried over from the current car. With a full tank of fuel and minus any passengers it weighs in at 876kg –half a Porsche Panamera.

The styling changes, which include a new front grille and ‘nostrils’ either side, LED running lights and a more pronounced rear diffuser not only help to freshen up the looks, but reduce drag by four per cent.

The unassisted steering, only possible in a car this light, is a joy to use. Turn into a bend and it weights up beautifully as the tyres load up, letting you know exactly what’s going on at road level. Stamp on the brakes and you can be confident the car will stop sharply and predictably every time.

If you’re looking for a little more than the basic 134bhp model driven here, the 189bph Elise R and 217bhp Elise Supercharged are still available starting from £31,450 and £34,450 respectively. Both get the facelifted body panels, but stick with the same 1.8-litre engine.

But for the ultimate road-going Elise, the lower-powered model is still the one to have. Not only will you save a chunk of cash, but the purity of the driving experience as good as it’s always been. And now with rock-bottom CO2 emissions, it’s a car that really does let you have your cake and eat it.

Rival: Mazda MX-5 The MX-5’s extraordinary success has been built on similar principles to the Elise. By keeping things simple it leaves the driver to feel connected to the driving experience. Facelifted this time last year, the MX-5 isn’t as hardcore as the Lotus, but with its more accessible price tag it has a broader appeal.