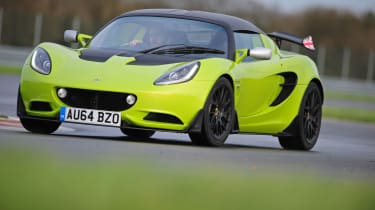 At £6,300 more than a standard Elise S, the S Cup version isn’t particularly cheap, especially when the base model will be quick, responsive and engaging enough for most. Yet the added visual, aural and mechanical drama makes it one of the most intoxicating sports cars at any price. So, while it’s an expensive toy few will be able to justify, this never pretends to be anything else. And for that, we love it.

The Lotus Elise S Cup is essentially a racecar with number plates. A watered-down version of the full-blown Elise S Cup R racer, it’s infused with Lotus’ motorsport magic and could be one of the most exhilarating models that the brand has ever created.

Halfway between the standard Elise S and the stripped out Elise S Cup R, the latest addition to the stable carries over all of the racecar’s jewellery and wild aerodynamic bodykit.

The front splitter, winglets, rear diffuser and rear wing alone are enough to generate 61kg more downforce than the standard Elise at 100mph. At its 140mph top speed, the S Cup creates 125kg of downforce – 117kg more than the base model. It carries over the 1.8-litre supercharged engine and produces the same 217bhp, too – so no prizes for guessing the 0-62mph time remains unchanged at a blistering 4.6 seconds. 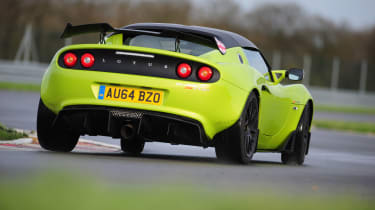 The low roof and wide sills remove any possibility of a dignified entrance, but once you sink into the drivers seat you’ll never want to leave – and not because its difficult to get out of. From the moment the four-cylinder whirrs into life and the wheels turn, the Lotus never fails to deliver one of the most visceral and engaging experiences possible.

Point its nose down a winding B-road, and the Elise S Cup attacks bends with even greater agility and precision. The springs and dampers are slightly firmer and the steering feels alive in your hands, allowing you to seamlessly stitch swooping bends together. 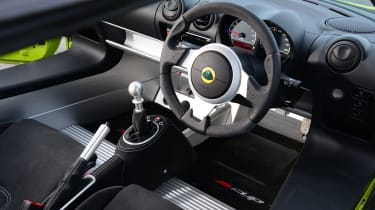 The 1.8-litre engine even sounds good; there’s not the same supercharger of old Elises, but just enough to let you know there’s some forced induction at work. It’s an eager engine, thriving off the revs with the bulk of power nestling right at the top end of the range.

Working your way through the short and snappy ratios of the six-speed manual gearbox encourages you to push on, while every sense is overloaded with feedback and information as to what the car is doing on the road. At higher speeds, you can feel the body being pressed into the tarmac in corners, with a good chunk of the added downforce coming into play upwards of 60mph.

Unsurprisingly, the Elise doesn’t have the compliancy of a Porsche Boxster over rougher ground, but on the flip side, its rival can’t match the tactility or voracious attitude of the Lotus. 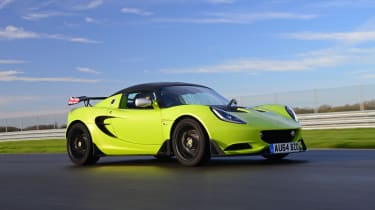 For the £43,500 price tag, you get electric windows, suede-style sports seats and a heater, but you can also have carbon-fibre race seats, a four-point harness and electrical kill switches.

Racecar extras are available, too, including a performance induction kit, even stiffer suspension and a roll cage – as the Elise S Cup can be converted into the fully blown racer, making it eligible for the Lotus Cup Series. Doing so adds around £8,000 but most buyers are more likely to fit air-con (£1,250) and a comfort pack (£1,200), which adds more sound insulation, an MP3- compatible stereo and central locking.