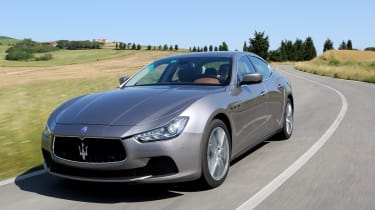 The fact that the diesel Ghibli returns 18.5mpg more than this V6 model will be too much for most UK buyers to ignore. However, if you want a ‘proper’ Maserati, wrapped up in a practical four-door body, this petrol model ticks more boxes. A throaty exhaust note, crisper reactions and the same great body control make it a very tempting proposition.

The diesel version of the new Maserati Ghibli has stolen the headlines, but the petrol model has a claim to fame, too. While designed by Maserati engineers, the 3.0-litre twin-turbo V6 is built at Ferrari’s Maranello factory.

There’s a 404bhp version of this engine with two or four-wheel drive in the top-spec S, but we drove the 325bhp rear-wheel-drive model. A true Maserati engine needs to sound great, and while it’s no match for the GranTurismo’s operatic 4.7-litre V8, the gargle from the four exhausts builds in intensity as the revs rise.

Performance is impressive, too – acceleration feels brisk rather than brutal, but keep the revs high and the turbos whirling, and throttle response is sharp enough to spin up the rear wheels in tight corners.

In fact, the whole driving experience feels less muffled than the diesel model’s. With 25kg less weight to haul around, the petrol car is lighter on its feet, the front end responds marginally quicker to steering inputs and it’s just as much fun as a BMW 535i to throw about on twisting back roads.

To maximise the Ghibli’s potential, you’ll need to engage Sport mode, which sharpens the throttle and gearbox, while adding weight to the steering and raising the volume. We’d also recommend paying an extra £2,045 for the Skyhook adaptive dampers, which improve body control significantly in their firmer setting, but in comfort mode turn the Ghibli into an accomplished cruiser.

The interior also feels and looks sufficiently expensive, there’s plenty of room for large adults in the back and the boot holds 500 litres of luggage. As for the curvy design? It’s not Maserati’s finest hour, but its a breath of fresh air in this often straight-laced market.