We see if new Maserati Ghibli saloon is worthy of the hallowed badge, as it battles capable Jaguar XF 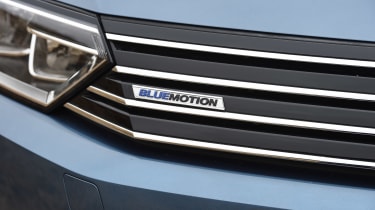 Maserati is celebrating its centenary in 2014, and bosses have big plans for the famous brand. Under the guidance of parent company Fiat, Maserati is expanding its model range, beginning with a stylish new saloon. And as a statement of intent, this car has been given one of the most evocative names from Maserati’s history books: Ghibli.

While the original Ghibli of the sixties was a grand tourer to rival supercars like the Ferrari Daytona, the new model is designed to take on the best high-end executive saloons, and it slots into the range below the Quattroporte limo. It shares its underpinnings with the Quattroporte, although some Maserati fans may be upset that the entry point to the range – which we test here – is powered by a V6 twin-turbodiesel engine.

However, diesel power is absolutely essential if the Ghibli wants to steal sales from established rivals in this market. To find out how this newcomer performs, we’ve lined up a hugely talented rival in the shape of the Jaguar XF. Even though the British saloon is getting on a bit, in high-power Diesel S guise it matches the Ghibli for power and torque. Our two test cars aren’t far apart on economy and emissions, either.

So can the fiery new Maserati make an impact? Or will the Jaguar come out on top in this clash of luxury sports saloons?

Hit the links above to read each review and then read on for our road test verdict.

These cars justify their high prices with their long lists of standard kit, while everyday costs are similar.

The Maserati emits 158g/km of CO2, with the Jaguar emitting just 1g/km more, so both models sit in road tax Band G, and company car costs are within a few pounds.

During its time on test, the Ghibli was nearly 3mpg more efficient, returning 29.3mpg in our hands – this backed up Maserati’s slightly better claimed figures. 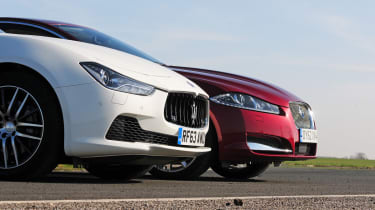 Both cars get eight-speed autos from German company ZF, but the Jag’s is smoother, and the rotary gear selector is more intuitive than the Maserati’s trigger lever.

Still, the Ghibli’s £245 optional aluminium shift paddles (above) are great to use, and suit the car’s sporty character perfectly.

Looks are always subjective, but we think the Maserati is far more distinctive than the Jag, thanks to its low-slung nose and angular lights. It’s more sports car than saloon – although the rounded rear end isn’t quite as stylish. 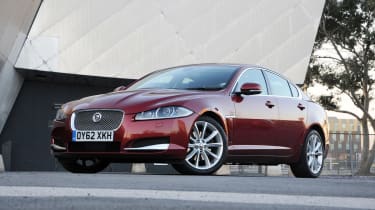 It’s been around for a while now, but the Jaguar XF still ticks all the right boxes as a sports saloon. While it’s not as sharp as the Maserati in bends, it remains entertaining to drive and has plenty of performance, plus it’s a comfortable cruiser when you’re not in a hurry. 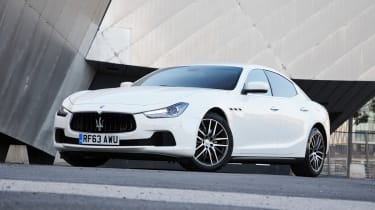 The Ghibli is a solid effort from Maserati. It looks fantastic, and the diesel is a decent performer. But vague steering takes away from the sharp handling, while the firm ride, hesitant gearbox and disappointing quality mean it can’t match the Jag’s all-round talents.