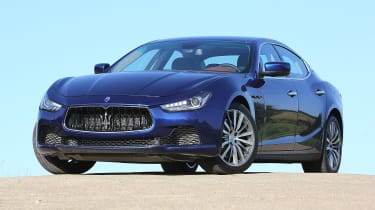 There’s a lot to like about the Ghibli, not least the car’s styling. The Maserati brand has real cachet, too, and for many buyers the fact that it’s not a mainstream German marque is a big attraction. But if you’re buying with your head rather than your heart, rivals are more accomplished all-rounders. Don’t dismiss the Maserati, assuming that it’ll be hideously unreliable, because so far these cars seem to be holding up extremely well. There don’t appear to be any fault patterns at all, just isolated incidents of things going wrong. As a result, most Ghibli owners seem to love their car, but online forums make it all too clear that some dealers are much better than others.

Although Maserati was formed in 1914, it built only racing cars until 1946, when it launched its first road-going model. Then, in 1967 came an all-time great: the original Maserati Ghibli, a rakish two-seater supercar with a 4.7-litre V8 engine.

The Ghibli badge was revived in 1992 for a four-seat grand tourer based on the Biturbo saloon launched in 1981. When Maserati turned to the Ghibli name for a third time, it was on an executive car tasked with lifting the company’s sales to 50,000 per year.

The availability of a diesel Maserati for the first time helped the firm towards this target, with global sales peaking at 46,000 in 2017 – but just 36,000 Maseratis were sold last year. Has the Ghibli already had its day? 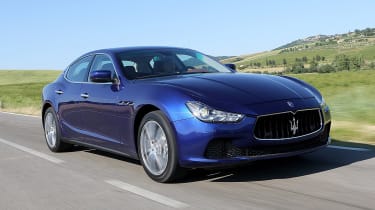 The Ghibli Mk3 arrived in September 2013, with 3.0-litre V6 petrol or diesel engines, the former coming in 325bhp Ghibli or 404bhp Ghibli S forms. Initially only the diesel had a stop/start system, but at the end of 2015 the petrol engines got it too, while the diesel adopted AdBlue emissions-reducing technology. A motorised bootlid was also introduced, along with extra soundproofing, blind-spot warning and an upgraded hi-fi.

A year later a new suite of driver aids joined the options list, the multimedia set-up was upgraded, and Sport and Luxury trims were introduced. For 2018 these were renamed GranSport and GranLusso, the exterior design was updated, adaptive LED headlights became standard, and the petrol engines were tweaked: the Ghibli offered 345bhp and the Ghibli S 425bhp, although the latter would be dropped by spring 2018.

For some, only a petrol Ghibli will do. There’s no denying that it’s more fun to drive than the diesel alternative, but the fuel and tax costs are higher. On the other hand, servicing a diesel car is more demanding, and petrol models can be surprisingly frugal on a run; it all depends on your annual mileage and how the car will be used.

Initially Maserati didn’t do trim levels. Instead, buyers got a single specification and added options to suit. Standard kit included 18-inch alloys, quad exhausts and bi-xenon headlamps, while the interior had electrically adjustable leather seats, wood trim and an eight-speaker hi-fi. Not all cars got a reversing camera, but it’s worth having.

Alternatives to the Maserati Ghibli

The BMW 5 Series is excellent to drive and comes with an array of fabulous engines, while the Touring estate adds practicality the saloon-only Ghibli can’t match.

Like the BMW, the Mercedes E-Class is rear-wheel drive by default and comes with a choice of bodystyles, plus excellent engines. Audi’s A6, S6 and RS6 models are similarly competent, with a choice of saloon or estate bodies plus a wonderful, user-friendly cabin.

The Jaguar XF is another car that’s great to drive and well equipped, while the Lexus GS is a left-field choice that’s incredibly well equipped and built. It comes in hybrid and V8 petrol forms, the latter blessed with an utterly addictive soundtrack. 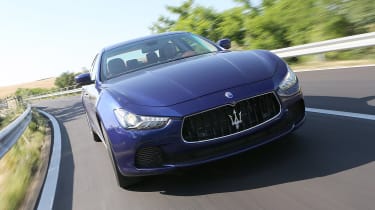 If the premium hi-fi system is fitted and it seems too quiet, the amplifiers need turning up. A franchised dealer can do this.

Some early diesel models were known to suffer from low oil pressure. These cars should have been repaired under warranty.

If there’s any glitch in the car you’re viewing, it’ll probably be with the electrical or electronic systems, so check that everything works.

The alloy wheels are 19, 20 or 21 inches in diameter and it’s worth bearing in mind that all have been known to suffer from corrosion.

Although there are plenty of premium materials, you’ll also see some switchgear from far cheaper models in the Fiat Chrysler range, which is disappointing. The original infotainment was poor, but things improved hugely in the 2016 facelift. Build quality is good and the seats are very comfortable, but tall adults have insufficient rear-seat leg and headroom. Boot space is decent, though, at 500 litres. 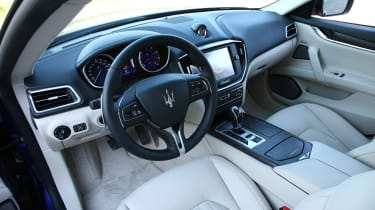 Ghiblis need servicing every 12,500 miles, but while petrol cars can go up to two years between services, it’s just one for diesels. Diesels typically alternate between minor and major services (£648/£1,040); the fifth service costs £1,383. The petrol schedule ranges between £689 and £1,318. Neither engine has a cambelt.

Maserati has issued 10 recalls for the Ghibli. Cars built up to December 2015 could suffer from a sticking throttle. Other recalls relate to: the suspension working loose; faulty wheel bearings and back axles; the gearshift mechanism; LED headlights; short circuits in the electrically adjustable driver’s seat; and fuel leaks. There have been three recalls for this last problem.

The Ghibli has never figured in our Driver Power surveys, but owner reviews from sister title Carbuyer average an impressive 4.1 out of five. They indicate the Maserati doesn’t have the polish of mainstream German rivals; some owners accept this, but others see it as a flaw. The Ghibli is held in high regard dynamically and most cars have been reliable – although there are some issues.