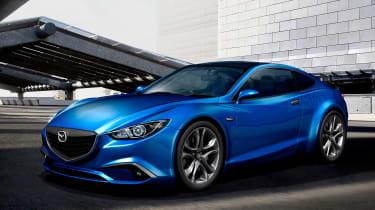 Mazda is set to add some sparkle to its 6 range by introducing a swoopy two-door coupe to rival BMW’s 4 Series.

The Japanese company has already enjoyed great success with saloon and estate versions of the 6, but it now wants to lock horns with the premium German brands and break into the luxury coupe market – and our exclusive main image shows how the car could look.

According to inside sources, Mazda will launch its 6 Coupe by 2016 as it seeks to add more derivatives to its core line-up – made up of the new 2 supermini, 3 hatch and standard 6, as well as the CX-5 crossover and new smaller CX-3 crossover, which is set to be revealed at November’s LA Motor Show. 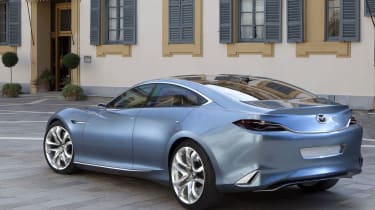 The 6 Coupe will sit alongside the new MX-5 at the sporty end of the range. At the front, the two-door 6 bears a clear family resemblance to the saloon and estate, but there’s likely to be a lower bonnet line and more distinctive bumper styling to give a racier look.

Overall the Coupe will have a lower, more squat stance in contrast to the more upright saloon – similar to the treatment BMW gave its 3 Series-derived 4 Series Coupe. A sleeker roofline that elegantly falls to a stubby rear is also likely, giving the Coupe more of a sports car look.

Mazda already has form with this type of car. Its Shinari Concept, which was shown in 2010, debuted the brand’s current Kodo design language and previewed the look of the latest 6. And while that concept was a four-door coupe, it’s easy to see how its flowing lines could be translated to a two-door 6 Coupe and show off the next step in Mazda’s design evolution. 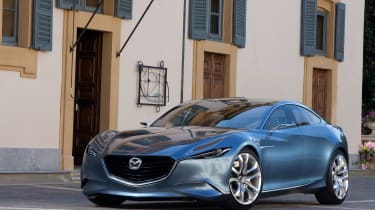 Further cars the company looks set to add to its line-up from 2016 onwards include a diesel hybrid 6; hot MPS versions of the 2, 3 and 6; a baby 1 for developing markets such as Asia; and a 2-based premium compact car to target the likes of the MINI and Citroen DS3.

Along with this ‘posh’ model, the 6 Coupe would help the company’s push upmarket, as it moves away from the industry’s shrinking middle ground. Although it’ll feature conventional SkyActiv petrol and diesel engines instead of a rotary unit, the Coupe should also go some way towards satisfying performance fans who are waiting patiently for a reincarnation of the RX-8 sports car.

Would you like to see a new large coupe from Mazda? let us know your thoughts in the comments section below...