Mazda’s latest tech will improve comfort, stability and grip - and we’ve tried it 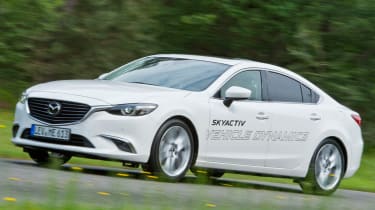 Mazda has revealed a new engine control technology that helps improve comfort, stability and grip. We got the chance to try the new system, which is called G-Vectoring Control (GVC), in France this week.

The system limits the torque from the engine to create a smooth transition between G-forces. It works at all times, measuring steering wheel movements every five milliseconds – bringing benefits on both straight roads and during cornering.

It does so by optimising the vertical load on different corners of the car, in the same way that a racing driver would modulate their inputs on the throttle during cornering. Because this system uses super-fast computers, it’s said more accurate than a person could ever be.

During a corner, the system will limit torque by up to 30Nm (most of the time it will be around 10Nm) to shift the load of the car to the front wheels to improve turn-in, allowing the load to move to the back as the driver accelerates away, thus improving stability. 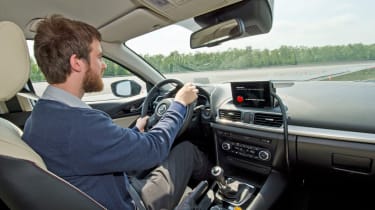 The effect is most pronounced on low-grip surfaces, but had a chance to try the system on both straight roads, as well as on a dedicated handling course. Mazda says the system is designed to go unnoticed by the driver, and that’s the exact impression we got on the Mazda 3 and Mazda 6 models we tried.

It feels natural and helps with smoother more efficient driving. It’s designed to with the balance of the car, reducing the load on things like neck muscles in particular. And while the big red button in our test cars to turn the system on and off was fun, the difference was so minimal that we could only really feel the difference on the low-grip surface. Telematics proved that our tiny steering inputs were reduced over the straight section, too - so on a long trip, we’d have used quite a bit less energy.

Mazda says the system is part of a human-cantered design philosophy, and will also help your body prepare itself better for corners. Because the steering response feels more natural, you are better prepared to absorb the movement as you go around a corner. 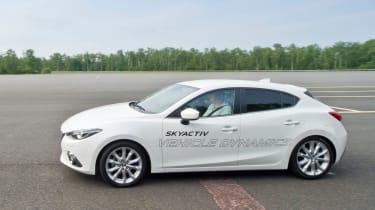 Chassis platform manager Alexander Fritsche described the system as “simple in theory, but complex to implement,” as the torque control needs to be done instantly. Mazda’s latest range of Skyactiv engines and chassis were the only units able to support the system, which has actually been in development for around six years.

Unlike torque vectoring, the GVC system increases grip rather than the amount of wheel rotation - but the key difference is that it can be fitted using only engine software and sensors. That means it can be fitted to any current Mazda without much extra cost – so it’s expected to come as standard on the updated versions of the whole range.

Updates will start in the summer, but Mazda isn’t saying which car will get the system first. We expect to see the first car with GVC getting it as part of a mid-life facelift, however, which is likely to be the Mazda 3 hatchback.

What do you think about Mazda's plans? Let us know in the comments below!