The petrol auto version of the Mazda CX-5 SUV is a niche choice, but it’s worth exploring 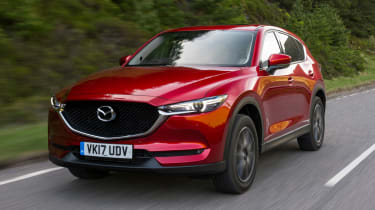 The CX-5 remains an extremely appealing mid-size SUV, mainly because of its solid driving characteristics, family friendly space, comprehensive list of standard equipment, and its impressively crafted interior. This new automatic petrol option certainly expands the Mazda’s appeal, but unfortunately it isn’t our pick of the range.

The Mazda CX-5 hasn’t really been facelifted. It looks almost exactly the same as the car launched last year, instead receiving changes to the individual trim levels, an updated diesel engine with a bit more power, and a new automatic petrol option.

Diesel has long been favoured in cars of this size, but with a recent backlash against the fuel putting sales under a bit of pressure, petrol could be back on the menu for mid-size SUV buyers.

That’s why Mazda has expanded its petrol offering with this automatic option. The 2.0-litre, four-cylinder naturally aspirated engine hasn’t been altered, and drive is still sent to the front wheels exclusively, but a new six-speed automatic gearbox is now also fitted. 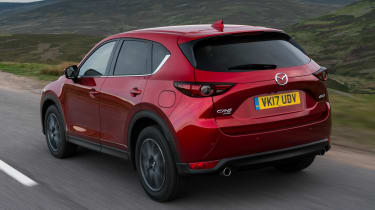 In truth, we’ve always been quietly impressed with the petrol-powered CX-5. The 2.0-litre engine does without turbocharging, but it doesn’t feel immeasurably weaker for it. There’s 213Nm of torque, and the CX-5 certainly makes the most of it. The gearbox seems to work nicely with the power delivery, too.

This is a very smooth SUV to drive, the transmission is rarely wrongfooted and the engine is very quiet at a cruise, only becoming vocal if you floor the throttle. Opting for the automatic gearbox doesn’t result in a harsh fuel economy penalty, either, with that 42.8mpg figure obtained under new WLTP testing procedures.

Elsewhere, it’s as you were. That means a fine balance between a composed ride and composed cornering, and extremely well sorted steering. Few, if any, cars in this segment and price range are better to drive. 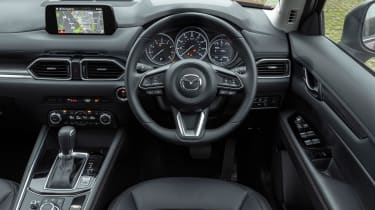 The interior is impressive, too, using superb materials and being neatly laid out. However, while space for five is generous, the Mazda still lacks a seven-seat option.

This automatic petrol CX-5 certainly adds something extra to the line-up, and it’s a nice car, no question. There’s a £1,500 premium to add the automatic gearbox, which isn’t a huge cost to cover. But it still won’t be to all tastes, on top of which diesel grunt and fuel economy are likely to remain in demand. Diesel CX-5s are the only models available with all-wheel drive, too.