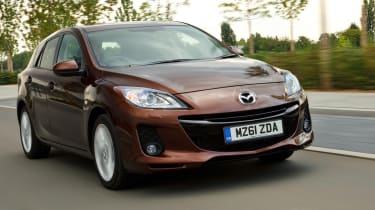 The Mazda 3 is a better car for the small improvements made to its looks, suspension and equipment levels, but it remains a relatively rare sight on UK roads. We really like the way it drives, and its improved handling – but can't help but feel that interior quality is not a match for rivals from Volkswagen and Ford. As a result, top specification cars look expensive, despite their material appeal.

We've long been fans of the Mazda 3 here at Auto Express. Measured against rivals like the Ford Focus and Volkswagen Golf, it feels sporty and fun to drive.

But as rivals from Ford and Volkswagen set new standards for comfort and technology, there's no doubt that the 3 has been left feeling a little past its prime.

To remedy that, Mazda will launch a facelifted version of the small family hatch early in 2012 offering new looks, an upgraded interior and revised suspension.

Available only as a five-door (the saloon is being dropped in the UK), the range will include 1.6 and 2.0-litre petrol and 1.6 and 2.2-litre diesel engines. A turbocharged 2.3-litre 3MPS version will also be on offer, with a massive 255bhp.

We tested the 1.6-litre diesel Sport Nav – a £19,945 model which gets 17-inch alloy wheels, a sports body kit and an integrated touch-screen sat-nav system. The centre console is largely unchanged but there is a revised LCD display for the trip computer.

In keeping with Mazda's focus on improving the performance of its cars, there are also small improvements to fuel economy - which see the 1.6D return a creditable 65.7mpg. CO2 is pegged at 115g/km, but there's no stop and start function on this engine.

Capable of sprinting from 0-62mph in 11.0 seconds, the car feels fast. Under full throttle, the diesel engine is noisy, but it revs freely and feels responsive. With 270Nm of torque available from 1,750rpm, there's no doubt that in gear performance is strong - and as an added bonus, the car makes a comfortable cruiser. At 70mph the engine ticks over at a hushed 2,200rpm.

Steering is accurate, and Mazda says that a new electro hydraulic power assistance pump has sharpened feel. We would agree that the system feels reassuringly accurate, particularly when you turn into bends.

Adjustment to suspension helps to smooth the Mazda 3's previously nervous ride, and has the added benefit of making the car feel more solidly built, particularly over pot holes. Special mention should also go to the brakes, which offer lots of feel, and fine control.

So have the changes been enough to allow the 3 to keep pace with rivals from Ford and Volkswagen? The level of technology on offer will please some, while upgrades to the suspension help the 3 keep its sporting crown, without ignoring comfort completely.

However, we would like to have seen changes to interior quality go further, particularly when you consider the top specification version we tried was almost £20,000. The Mazda 3 looks a better prospect lower in the range.