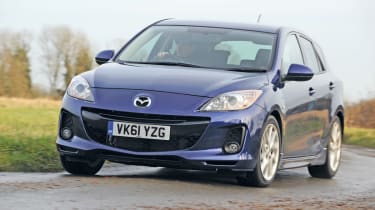 We like the Mazda 3 for its sharp handling and stylish looks and, thankfully, this latest facelift has subtly improved both of those. This 182bhp diesel engine is a perfect fit for the sporty Mazda, with its blistering in-gear punch, while the improved running costs are a bonus. There are still a few drawbacks, such as the cheap-feeling plastics on the dashboard. But when a comparable Golf costs nearly £4,000 more, those complaints begin to feel less and less important.

Mazda has introduced a new and improved 3 for the New Year, but does the updated VW Golf rival have what it takes to steal a few more sales from mainstream offerings?
Although the facelifted 3 doesn’t look much different to before, it’s benefited from a few subtle exterior changes. Take a close look at the front end and you’ll notice a softer grille, while at the rear the light reflectors are moved to the outer edges of the bumper so the car appears wider.
The subtle approach continues inside, with a simplified centre console, improved instrument dials and a new gearshift indicator between the speedometer and rev counter. Unfortunately, the quality of the plastics on the dashboard and door panels still leaves a lot to be desired, with the materials feeling

hard and scratchy.
We tested the 182bhp 2.2-litre turbodiesel – apart from the MPS hot hatch, this is the fastest and most expensive car in the line-up. It accelerates from 0-62mph in 8.2 seconds, but what impresses more is the mid-range shove, which makes the 3 ideal for overtaking. Thankfully, the diesel engine is also smooth and refined on the move.
Mazda has made a few subtle changes to the engine so fuel economy is improved by 3.5 per cent to 52.3mpg. CO2 emissions are down from 149g/km to 144g/km, too – both very impressive figures for the performance on offer.
If the powerful diesel isn’t the right choice for you, there’s also a 148bhp version of the 2.2D, as well as a 1.6-litre diesel which is now more frugal, returning 65.7mpg. The entry-level 1.6-litre petrol engine is unchanged, but updates to the 2.0 petrol engine have improved average economy to 42mpg.
The Mazda has always been good to drive, and with a few tweaks to the dampers and a more rigid body the handling is tighter than ever. The electro-hydraulic power-steering is well weighted, provides a decent amount of feedback and is quick to respond. Combine all this with the firm suspension, and the 3 is the perfect choice for twisty back roads.
Our only complaints concern the driving position – the steering wheel doesn’t extend far enough towards the driver – and the notchy gearshift. Once on the move, shifting up and down through the gears is easy, but we found selecting first, second and reverse tough at times.
Other 3s we’ve driven haven’t suffered this problem, but with only 300 miles on the clock, we reckon our test car would loosen up a few months down the line.
In addition, the 3 feels slightly less comfortable than the likes of the Golf and Ford Focus, with rough roads sending a few more jolts into the cabin than you might normally expect. But when you look at what great value for money this 2.2D model represents, you realise you can probably live with these gripes.
The only diesel-engined Golf with comparable performance is the GTD, and that’s nearly £4,000 more expensive than the £20,895 Mazda. Plus, the new car comes loaded with equipment. Heated front seats, integrated sat-nav (although the screen is far too small), keyless go and rear parking sensors are all included as standard on the 3, but will cost VW buyers extra. Take all that into account and this Mazda begins to look like a bit of a bargain.
Share this on TwitterShare this on FacebookEmail