The Mazda MX-5 30th Anniversary is a celebration of three decades of the MX-5, but is it more than just a PR gimmick? 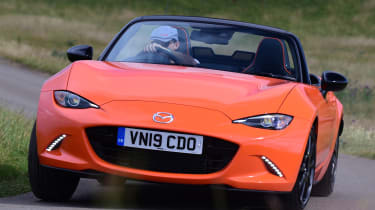 Mazda loves a special edition MX-5, and for the car’s 30th birthday the firm has been busy once again. The 30th Anniversary adds a range of extra equipment but you will have to like orange, as that’s the only colour it comes in. While there was room for the 30th to be every so slightly more special, it’s set to be a sure-fire collector’s item amongst MX-5 fanatics.

Few cars have had as many special editions as the Mazda MX-5. Over the past three decades the UK has had more than 50 specials alone, with each one being highly prized by diehard MX-5 fans.

The latest is the 30th Anniversary, which, unsurprisingly, celebrates the MX-5’s 30th birthday. Unlike some of the MX-5 special editions over the years, however, this one is on a limited production run with 3,000 available worldwide. Just 550 are earmarked for the UK – 370 Convertibles and 180 RF models; the soft-top costs £28,095 and the ‘Retractable Fastback’ is £29,895.

You won’t mistake the 30th for any other MX-5 special edition, thanks mainly to its paint. All 3,000 cars come in Racing Orange (presumably referencing the 1991 Le Mans-winning Mazda 787B) and a selection of other unique trinkets. There’s the obligatory numbered plaque on the side sill (only on the driver’s side, though) and a set of unique RAYS 17-inch lightweight forged aluminum alloy wheels with ‘30th Anniversary’ lettering on them. Behind them sit Brembo brake calipers for the front and Nissins for the rear, both finished in orange.

Inside, there are even more splashes of orange, with a pair of part-leather, part-Alcantara Recaro sports seats with complimentary piping. There’s more Alcantara on the gearlever, gaiter and parts of the dashboard, orange stitching on the steering wheel, and ‘30th Anniversary’ badges on the carpets. As the 30th is based on the 2.0-litre Sport Nav+ trim level, all cars get a Bose sound system, LED headlights, parking sensors and sat-nav. That’s where the celebratory gifts stop, however, as the 30th Anniversary receives no mechanical upgrades whatsoever – despite the racy image.

It’s powered by the same 181bhp 2.0-litre engine (which replaced the old 158bhp 2.0-litre late last year) as the Sport Nav+ model, hooked up to the same six-speed manual gearbox sending power to the rear wheels. Like before, it’s fitted with that car’sBilstein dampers, limited-slip differential and a strut brace under the bonnet. Unusually, this is both good and bad.

Let’s start with the good: The MX-5 is the finest handling car of its type. Naturally, the 30th Anniversary revels in the standard car’s glow with a back-to-basics feeling that other more expensive sports cars fail to match. The sharp steering, progressive brakes, precise gearbox and agile chassis, help to turn the most mundane drive into one that’s hugely rewarding. It’s quick, too, as the engine can be extended all the way to 7,500rpm. The new sports seats are mostly good, as well – they pinch your bottom ever so slightly, but with better thigh and upper body support, the 30th is arguably a more comfortable long distance car than the standard MX-5. 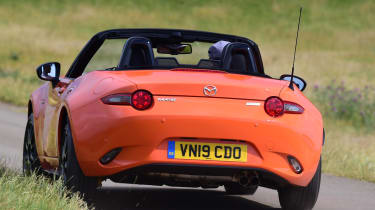 The 30th feels ever so slightly stiffer than a Sport Nav+, which is odd as Mazda hasn’t tweaked the car. But overall there’s still a pliancy to the ride that ultimately makes the MX-5 such an easy-going car to drive every day. The only real criticism of the special MX-5 is that it could feel just little bit more, well, special.

Along with the 30th Anniversary, Mazda has also released a range of option packs, which add extra visual appeal and mechanical enhancements. The Cup Pack lowers the car by 25mm thanks to a set of Eibach springs and adds a Bastuck sports silencerto the exhaust, for example. By fitting these, Mazda would not only have sharpened up its on-road driving characteristics, but also enhanced the car’s exclusive quality the paintwork so readily shouts about. But as nearly all 550 cars are all spoken for, perhaps the 30th is as special as it needs to be.