‘Right now, battery tech can’t give us the McLaren of EVs’ 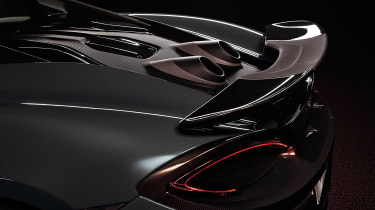 The best, most inspirational moment of the recent Goodwood Festival of Speed? Watching a Formula Three car being piloted by one of the quickest drivers of the weekend – Billy Monger, who relies on a hand throttle to accelerate, and one of his prosthetic legs to brake. Lewis Hamilton retires soon, so could Brave Billy, 19, be the heir apparent? I hope so.

At the other end of the scale, the worst, most depressing moment was the appearance of the slow, uninspiring Roborace ‘car’ that drives itself.  There’s nothing wrong with autonomous vehicles for those who can’t or don’t want to drive. But if driverless tech is the way motor racing is headed, it’s dead.

• Everything from the 2018 Goodwood Festival of Speed

While these were the highs and lows at Goodwood, McLaren Automotive was confident, single-minded and mischievously irreverent like never before. This is a company that so relishes working in leafy Woking that it proudly stamps ‘Made in Surrey, England’ on its cars. It insists it’ll never build an SUV because its customers are happy with their Range Rovers. So why not go half way and, in conjunction with JLR, do a McRange? That’d work.

“Maybe it could,” a McLaren director told me over dinner at Goodwood. “However, we have no space, financial need or desire to build an SUV. But most importantly, our customers aren’t asking us for one. They want us to focus on mid-engined sports cars and supercars.” Fair enough.

But such McLarens are circa £100,000 and more. A baby McLaren for Porsche Boxster money would be nice? “A McLaren for less than £100k wouldn’t be a true McLaren, as the technology, craftsmanship and capability inherent to our cars couldn’t be incorporated for any less than our current entry point. And before you ask, there are no plans for a van, either,” my man said with a grimace.

Does McLaren’s bad run in Formula One put buyers off its road cars? My insider added: “Seemingly not as we haven’t won an F1 championship since we began building road cars. And apparently we’ve been quite successful at that.”

Pure-electric vehicles – this is something that doesn’t excite the Woking outfit at the moment. “Right now battery technology can’t give us what we need to make the McLaren of EVs,” he told me. “For an EV to be a McLaren, it needs to be able to do 10 laps of the Nardo test track on a single charge and not weigh two tonnes. We’ve begun research into a fast-charging, lightweight battery that may mean you see the McLaren of EVs towards the end of our Track25 business plan.”

So that’s 2025, latest. But McLaren is a company that very deliberately pegs its production numbers to remain exclusive. Petrol-electric cars it can’t do without, but pure electrics it can. At least for the next five to seven years.

Would you like to see an all-electric McLaren in the future? Let us know below...