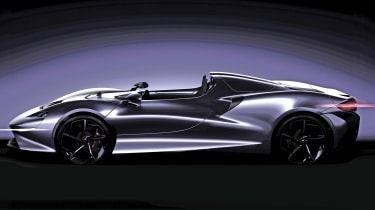 McLaren has confirmed that a new ‘Ultimate Series’ hypercar is in the works, which will make its full debut at some stage in 2020 and will be strictly limited to just 399 examples.

Announced at Pebble Beach Concors d’Elegance, McLaren has also teased the design of newcomer in typically shadowy format. The roofless model is described as a ‘two-seat, open cockpit roadster’, sitting low with only a minor lip for a windscreen, and with noticeably contoured flanks. Dihedral doors will be fitted, too.

The new car, which could be called GTZ or more likely GT Superlight based on recent McLaren trademark applications, will sit between the Senna (£750,000) and upcoming Speedtail (£2.1m) in price.

The company is taking expressions of interest from current customers at the Pebble Beach gathering in San Francisco this weekend.

While the Senna has been designed for outright track performance, with the Speedtail an aerodynamic special majoring on outright top speed, the third Ultimate Series car will be a road-focused machine.

The engine has been confirmed as being the 4.0-litre twin-turbocharged V8 used across the brand’s entire line-up. It’s likely to arrive with the same 789bhp figure as the Senna, sending drive to the rear wheels through a seven-speed dual-clutch gearbox.

It’ll still utilise McLaren’s carbon-fibre tub chassis, and the firm claims that it’ll be the lightest car the company has produced in the McLaren Automotive era (2010 onwards). To that extent, the bodywork will likely be all carbon-fibre too.

Click here for more info on the new McLaren GT by MSO revealed at Pebble Beach...

Visit McLaren cuts a quarter of its workforce

The new McLaren Elva has been shown off in a retro-inspired livery, while the novel wind deflector system has been explained in a Facebook video
Visit New 2020 McLaren 765LT revealed as latest Longtail model