The most affordable McLaren packs a serious punch but does it display the other qualities of its more exclusive brethren? 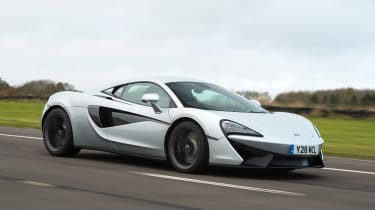 On the road, you’d be hard pushed to spot the 540C’s performance deficit to the more expensive 570S. So not only does it offer the same supercar looks, quality and brand image as that car, it drives just as well, too, with delicate steering and a sweet chassis. It’s a pity the engine isn’t a little more responsive, but the overall package compensates. Yet another brilliant car from Woking; McLaren is at the top of its game.

You may never have expected to see the words “entry-level” and “McLaren” in the same sentence. But the firm’s 540C – which sits under the 570S and 570GT in the brand’s Sports Series – is precisely that.

At £128,550, it’s the most affordable McLaren you can buy, but you still get the obsessive attention to detail that runs through all of the Woking company’s vehicles. This means the moment you send the dihedral door skywards and lower yourself into the cockpit, you’re met by the same perfect driving position.

You sit low, with your legs outstretched and the wheel expertly positioned. The digital dash sits right in front of you, giving a race-car vibe, but the low scuttle means forward visibility is brilliant. Bolted to the back of the 540C’s carbon-fibre tub is the same 3.8-litre twin-turbo V8 from the more powerful 570 models. However, here it’s detuned to produce 533bhp and 540Nm of torque. This is still plenty, and makes the 1,313kg McLaren startlingly fast. If you use the seven-speed dual-clutch gearbox’s launch control, it’ll sprint from 0-62mph in just 3.5 seconds. 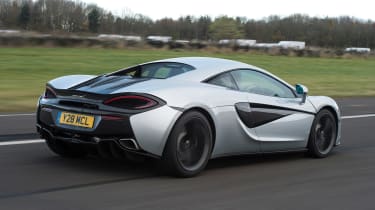 On the road, there’s noticeable turbo lag from the V8 at low revs, so it doesn’t have the split-second throttle response of a Porsche 911 Turbo. There is some character as the revs rise and the V8 comes on boost, though, hurling the car down the road in a shower of flashing gearshift lights and a bark from the exhaust. With McLaren’s Active Panel enabled, which allows you to customise driving modes for the engine, gearbox and chassis, the upshifts are savage in Track mode while the stiffest setting for the dampers means it corners with barely a hint of roll.

The steering is perfectly balanced – light, but still with enough weight – and the detail it relays through the rim is so textured, the connection to the front axle is beautifully transparent.

While the 570GT’s fidgety steering won’t suit everyone on a long trip, given its more refined, grand-tourer approach in the 540C it sets the tone beautifully. The brake pedal needs solid, sustained pressure to stop the car, while the long-travel throttle means that, once you’re through the turbo lag, you can easily send the power you want to the rear wheels. 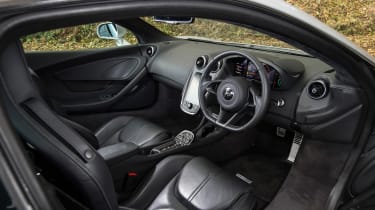 Traction is brilliant for a mid-engined car, while the half-way house ESC mode lets you indulge in the chassis’ beautiful balance where appropriate. Be warned, though: it’s a precise and sometimes twitchy car if you do. However, the delightful precision from the steering lets you make the most of the phenomenal grip on offer.

So, what’s the car like when you settle down to a cruise? Well, the buzzy engine that loves to rev on full throttle drones under lighter loads on the motorway, and while most of the gearshifts are slurred nicely to avoid any jerky changes in town, the occasional switching of ratios can be felt with a thud through the structure.

There’s no getting away from the McLaren’s sports car roots, either. It’s a firm car, even with the Active Panel set to Normal. Unlike the more expensive 650S, the 540C uses physical roll bars in place of a sophisticated hydraulically interconnected suspension system. It means you feel more through the road, but the dampers do their best to filter out cracks in the tarmac. 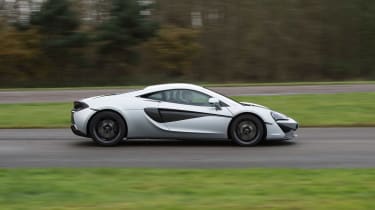 The end result is a supple and composed ride, but the trade-off with that carbon-fibre structure and firm set-up is that you feel more vibrations on the move, even in the softest setting. A top-of-the-range 911 Turbo is arguably easier to live with. But this is a sports car, and a brilliant one that still offers more than enough concessions to everyday usability. Unlike a lot of mid-engined cars, you can actually see where you’ve been in your mirror, thanks to decent rearward visibility.

The 540C’s leather-lined cabin is carried over from the 570S and is beautifully detailed, offering a good level of comfort.  It features the brand’s latest infotainment system, with a logical set-up and shortcut keys for things like nav and climate control. 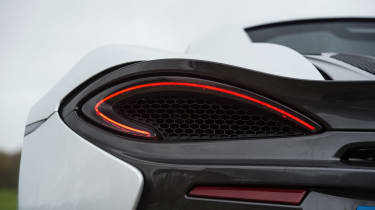 The 144-litre front boot offers enough space for two people’s luggage, and McLaren even claims the car will return 25.5mpg. Don’t expect to see this on the trip computer if you explore that rip-roaring engine, though, while the 258g/km CO2 emissions put it in the highest tax bracket. Although the 540C is McLaren’s entry-level model, it still feels incredibly exclusive, and more special than a 911, Nissan GT-R or even an Audi R8.