McLaren 570GT by MSO Concept to debut at Pebble Beach

McLaren 570GT gets the MSO treatment in this one-off concept car, designed to take advantage of the Californian sun 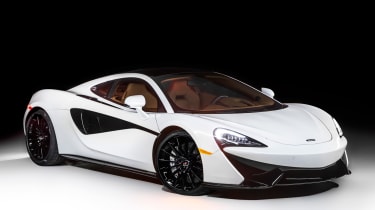 McLaren has released details on a new 570GT concept car that has been fettled by its MSO division ahead of its debut at the Pebble Beach Concours d’Elegance. The McLaren 570GT by MSO Concept, to give it its full name, comes complete with few choice improvements inside and out.

In case it wasn’t loud enough for normal 570GT buyers, the concept is fitted with an MSO exhaust system for “an improved aural experience". The pipework is made out of titanium, instead of normal stainless steel, which makes it 30% lighter than the standard car’s version. The exhaust is designed to give a “richer, more characterful tone” and has heat shields finished in golden titanium nitride, which changes colour to blue and purple as the system heats up. 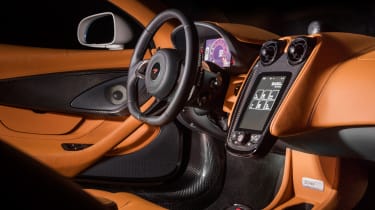 The concept features an Elite Pearl White paintjob and the MSO Piano Black package means details like the wheels, side vents and door sills are all finished in (believe it or not) black.

Along with a ‘By McLaren’ interior kitted out with a Bowers and Wilkins stereo and carbon fibre trim, the piece de resistance inside is the Electro-Chromic Roof. It’s basically a glass panel on the roof that has an interlayer that’s designed to filter out sun when you’re on your fashionable Californian road trips, but can be lightened or darkened to your request using a touch-sensitive panel in the headliner. McLaren says that the roof has five different levels of tint – from clear to a “rich, dark tint.”

McLaren has a history with unveiling cars at Pebble Beach, where the brand has previously displayed concepts and future production models like the P1 hypercar.

What do you think of the McLaren 570GT by MSO Concept? Leave a comment below! 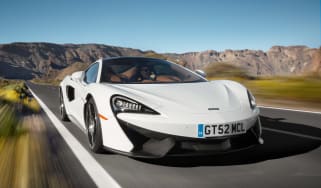