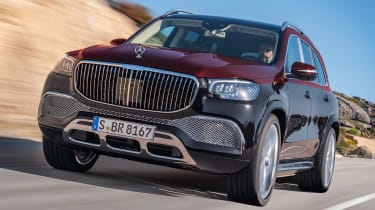 This is the new Mercedes-Maybach GLS. It’s a luxury-focused version of the German brand’s largest SUV, which is designed to compete with the Bentley Bentayga and Rolls-Royce Cullinan. It will go on sale in the second half of 2020.

The Mercedes-Maybach GLS shares its platform and body-in-white with the standard GLS SUV. Styling revisions include a redesigned front bumper, an updated radiator grille and a reworked rear bumper. It’s also fitted with Mercedes’ Multibeam LED headlights and 22-inch alloy wheels as standard – although 23-inch alloys are available as an optional extra.

Elsewhere, the Maybach GLS comes with a pair of active running boards, which are hidden behind the SUV’s side skirts. When one of the car’s doors are opened, a side step automatically deploys and the air suspension system lowers by 25mm, to make access to the SUV that little bit easier. 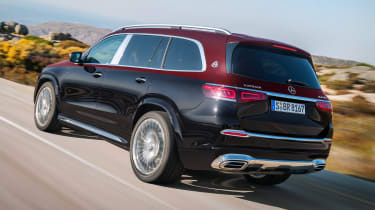 The cabin of the Maybach GLS is similar to that of the standard SUV, albeit with improved materials and additional technology. Buyers can also specify the option of a four-seat model that comes with a pair of reclining rear chairs and a fixed rear console, which houses a rear-seat climate control panel, two folding tables, an optional champagne cooler and a pair of silver champagne flutes.

Under the skin, the Maybach GLS is fitted with an upgraded version of the standard SUV’s air suspension system, which Mercedes says can better cushion road imperfections. Buyers can also spec Mercedes’s E-Active Body Control system as an optional extra, adding a function which actively leans the SUV into corners like a motorcycle, at angles up to three degrees, to the benefit of passenger comfort. 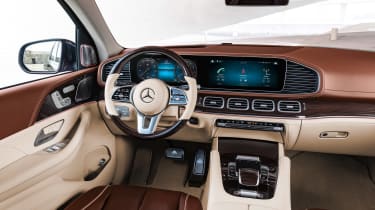 Mercedes has also fitted its flagship GLS with a new “Maybach Dynamic Select” drive programme, which is focussed on refinement and comfort. The drive setting limits the SUV’s body movements, smoothes out the engine’s torque curve, disengages the start/stop system and adopts a modified shift pattern for the automatic gearbox, with fewer gear changes for smoother driving.

The Maybach GLS is powered by a reworked version of the same twin-turbocharged 4.0-litre V8 engine found in the AMG GT supercar, which develops 550bhp and 730Nm of torque. The engine sends its power to all four wheels via a nine-speed automatic gearbox, which gives the Maybach GLS a 0–62mph time of 4.9 seconds and an electronically limited top speed of 155mph.

The V8 engine is supported by a 48-volt electrical system, which features an energy recovery function and Mercedes’s EQ Boost technology. The EQ Boost system is comprised of a compact battery pack and an integrated starter/alternator, which is capable of delivering an extra 22bhp and 250Nm of torque on demand. 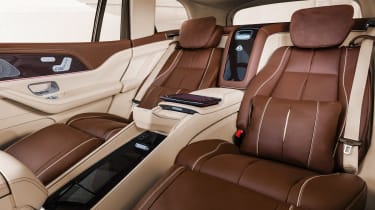 The SUV’s combustion engine comes with a cylinder deactivation system, which shuts down half of the V8’s cylinders under light load. Mercedes claims the Maybach GLS can return 24.1mpg.

Mercedes-Maybach is yet to confirm pricing information for its new flagship SUV. However, given that the Maybach S 600 carries a £100,000 premium over the standard S-Class, we expect the same structure will be applied to the Maybach GLS, with prices starting at around £180,000.

What do you make of the new Mercedes-Maybach GLS? Let us know in the comments section below…