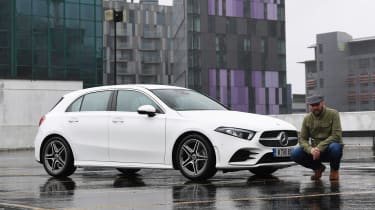 I’m really sad to say goodbye to the Mercedes A-Class. It perfectly suits my family’s lifestyle, with compact dimensions but enough space. The bonus is luxury and stylish design. I’ll particularly miss the first-class interior and tech.

Our A 200 is heading back to Mercedes shortly, and my family and I are gutted. Regular readers might be surprised by that. After all, I’ve struggled to return a decent urban mpg figure over the six months I’ve been running the car and questioned whether the ride and performance match the drive modes or live up to its sporty styling (in particular the stunning interior design and tech).

But what I have learned is that the A-Class perfectly suits my city lifestyle. It turns out I’m far more bothered about premium design and tech than I expected and less fussed about daily performance. In fact, I’m a sucker for the augmented navigation, active voice control (that works!) and ambient lighting.

If the A-Class were judged on its interior and technology alone it would be a five-star car all day long. Inside, it’s comfortable and luxurious with high-quality detailing and materials you’d expect from a Mercedes. But it’s the tech that’s generated the real wow factor among friends and family. In six months it has attracted more comments and questions than any other model I’ve ever run. 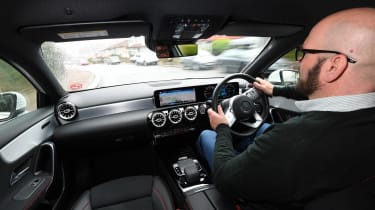 I think this is as much to do with people’s genuine surprise in the quality of the screens and beautifully designed gadgets in a family-sized hatchback, even if it is from a premium brand. It almost doesn’t look big enough to warrant the standard of tech. Passengers get in thinking compact family hatch and climb out expecting a red carpet.

I’m not daft and am aware that all of this comes at a price. The Premium package alone costs £2,395 and features twin 10.25-inch screens, heated seats, keyless operation and ambient LED lighting. Augmented nav is another £495, and bumps up this A 200 to more than £31k. But in my case, when I spend most of my quality car time in traffic or on motorways, it might be an investment worth considering. Now giving lifts in Dad’s taxi is as much a pleasure for me as it is for my kids.

One of the best things about the tech is the choice you get for configuring those two hi-res displays. From the design of the dials to the media set-up, there are numerous options from rev counters to eco readouts. 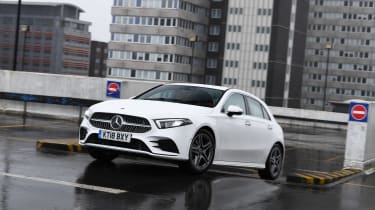 I like the tiny touch-sensitive buttons on the steering wheel, while I can use the responsive trackpad between the front seats, or even the touchscreen on the main centre display. I suspect if you spoke to 10 different A-Class owners they would configure their infotainment system in 10 different ways. I’ve even been seduced by the calming mood lighting and the attentive voice control.

Let’s be honest, it’s usually a gimmick and patchy at best, but this voice system works. It’s enabled with the keyword ‘Mercedes’ then a command. It’s excellent for switching radio stations and calling contacts fully hands-free.

Another winner is the augmented nav. A mixture of maps and signposts set over real-time video of junctions and roundabouts ahead, it’s surprisingly useful. But the thing I really love is the camera’s ability to capture a widescreen view of crossings when you’re in traffic. Talking of views, the A-Class has a low driving position, so being able to see traffic lights and the area beyond the A-pillars on screen is genius for a car used in traffic daily. 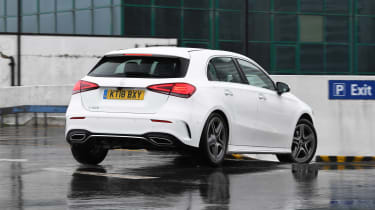 There is far more to the Mercedes than just its clever tech, though. It’s spacious and comfortable enough for my family of four, and is manoeuvrable in town. It’s simple to park, too. Multi-storeys are easier to navigate and less challenging than ever.

We pack light for holidays, so the 370-litre boot accommodated our luggage without too many compromises, either. So what are the drawbacks? Urban economy hasn’t been great, at 29.7mpg. With a concerted effort using the model’s eco displays and some careful coasting, I’ve lifted it to 33.1mpg overall and it peaked at 45.6mpg after piling on some motorway miles.

Both my wife and I find the A-Class’s powertrain has a split personality. It’s sluggish, so you push the throttle harder, only then it kicks down and races away like a rocket. We tried different drive modes, but never really got the balance of a smooth departure nailed down. That’s about all we’ve got to grumble about, though.

I have one more weekend break with ‘our Mercedes’. It’s tempting not to come back, because whatever I’m driving next will certainly have a tough act to follow. 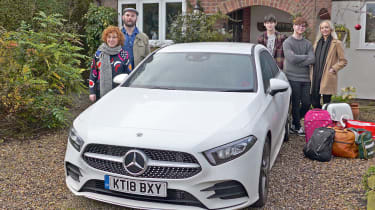 For many people the annual Christmas holiday season poses the stiffest test of their family car. People, presents, traffic and mileage, all at the same time as everyone else. It could have been hell, but was almost enjoyable in our Mercedes A-Class.

This year I was transporting five with my elder son George’s girlfriend Lucy joining us on a trip from south London up to visit family in North Lincolnshire.

That in itself would be a challenge for some compact family hatches, but our three adult-sized teenagers slotted into the back in reasonable comfort. We did feel the need to stop more than usual for some leg stretching and I’d have moved my seat back a notch or two if I’d had the room. Likewise the boot swallowed a couple of cabin cases, various bags, food and presents, but sadly there was no room for my record decks this year. 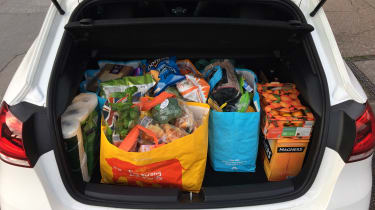 Our route took us via my brother’s house near Clacton in Essex; a nice mix of A-roads, motorway and country lanes. This let me check out the different drive modes on our A 200.

I’m usually stuck in Eco mode as I crawl around in city traffic (despite this, we’re returning a disappointing 29.4mpg). In Sport mode, I felt a real shift in power and none of the hesitant acceleration I was used to. I enjoyed the ability to overtake on the long, straight single carriageways and was impressed by the lack of wind noise, too.

The A-Class was certainly more fun to drive out of town, but in truth the design and look of the interior makes it feel as if it should be a bit quicker and more agile on the open road. Our journey from Clacton to North Lincolnshire threw up an unfamiliar route across East Anglia and a chance to test the Advanced Navigation Package (£495) as part of Mercedes’ MBUX infotainment system. 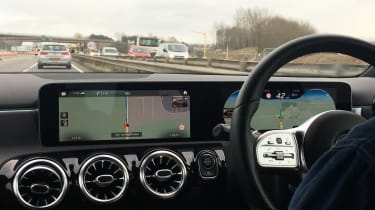 It boasts AI intelligence that learns driver behaviour, from music choices to road preferences. Sounds too good to be true? Well, I’ve got a decent brain for navigation, so can be sceptical of sat-nav road choices, but very quickly the MBUX felt intelligent, optimising routes and avoiding main roads to deliver a thoroughly enjoyable drive.

It also responds to voice commands in a similar way to systems such as Alexa. The keyword is Mercedes, then the A-Class asks what it can do for you. I’ve only ever activated it when explaining all the buttons and screens to passengers, but it’s always listening.

The augmented reality (AR) includes a number of clever features. The most obvious are the directional signs displayed over real-time video displayed through the infotainment screen. I’ve set my preferences so I can also see a map and display nav directions within the dials, to avoid looking away from the road too much. It’s helpful at junctions and roundabouts.

Another smart idea is the wide-angle view of an upcoming junction. This enables me to see the traffic light without peering out of the side or top of the windscreen, but more importantly lets me see anyone crossing the junction, avoiding those A-pillar blind spots.

Once in Lincolnshire, the A-Class’s final test was a round of golf. We had to transport five players and their kit; a two-car job. So we dropped the seats to squeeze four bags and two trolleys into the Mercedes and loaded the other car with people. Job done, which sums up my time with the A-Class so far. 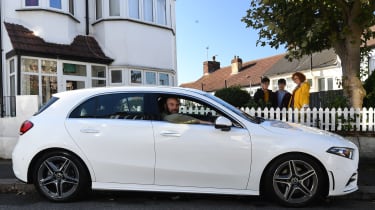 In well over 20 years at Auto Express, I’ve driven plenty of Mercedes test models, but I’ve never run one as my family car. And since taking delivery of our new A-Class, the first thing I’ve noticed is how excited everyone else is about it.

Friends and extended family often ask: “What are you driving at the moment?” And I’m now aware that this brand pricks up people’s ears like no other.

Our A-Class sits at the lower end of the Mercedes glamour scale, because it’s a really smart, but relatively conservative-looking compact family car. 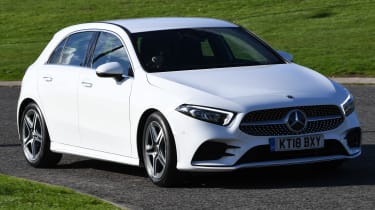 Try telling that to my wife and kids, though. After a few oohs and ahhs as ‘our new Merc’ was proudly parked up on the street for the first time, they excitedly scrambled in and out of it. They’re not the only ones to have heads turned; the neighbours were queueing up to sit in the front seats and fiddle with switches as well.

That’s with good reason, because the interior of our A 200 is stunning. For starters, it does all the good stuff that you’d expect: it’s comfortable, the materials look and feel premium and it’s beautifully built. I especially like the red stitching on the seats and the brushed metal on the doors.

The finishes are tactile and feel like real leather and suede, even though they’re Artico and Dinamica microfibre. They had me fooled at first glance, until I looked at the spec sheet. 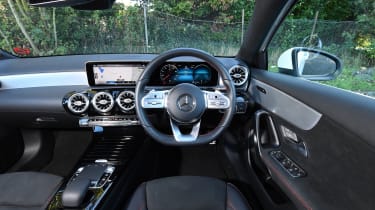 The design and layout of the dashboard take the interior of the Mercedes racing to the other end of that imaginary glamour scale. The infotainment system is incredible and dominates proceedings. It can be controlled either by the main trackpad (where the gearlever would be in most other cars), or two small touch-sensitive buttons on the steering wheel.

Touching the screen will bring up various menus and options with seemingly endless ways to configure the display layout and look. The only slight downside to all this is that you have to be really disciplined and responsible; you’re essentially driving with a giant smartphone in front of you.

As I’m not the only driver, I often find different displays enabled. My family particularly enjoys messing with ambient lighting that floods the air vents in blue and pink. That’s a bit bling for me, but it’s good to see the Mercedes is keeping everyone happy.