Following revisions to the standard C-Class, the Mercedes-AMG C 43 has now been updated with a power boost and revised looks 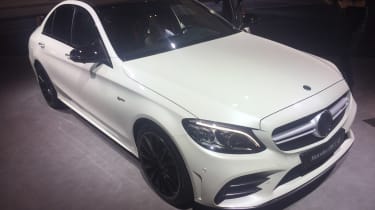 The semi-skimmed Mercedes-AMG C 43 saloon and Estate models have been updated for 2018, following changes announced for the standard C-Class range last month. The tweaks include a sizeable power boost, revised looks and “enhanced aerodynamic efficiency”.

Continuing to sit below the full-fat AMG C 63, the C 43 gains a selection of mid-life tweaks designed to mirror those implemented on the standard C-Class in February. The familiar bi-turbo 3.0-litre V6 petrol engine has been upgraded to offer 385bhp (23bhp more than before), though peak torque now comes in slightly later – albeit through a wider band – between 2,500 and 5,000rpm.

On-paper performance is unchanged. The saloon still does 0-62mph in 4.7 seconds, while the Estate is one-tenth slower. Both are electronically limited to 155mph. However, given the wider torque band, all C 43 models are expected to be marginally quicker in-gear between 50-70mph. 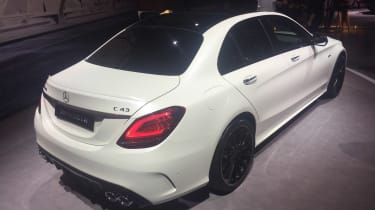 In addition to the more powerful engine, Mercedes-AMG’s engineers have updated the C 43’s drive modes by adding a ‘Slippery’ setting, specifically programmed for slippy or snow-covered roads. This works with the nine-speed transmission and 4MATIC+ all-wheel drive, always starting in second or third gear for optimal traction.

Elsewhere, Mercedes claims the C 43 is “considerably more expressive” – with all models featuring a new grille, bumpers and aero tweaks. At the rear there’s a new set of quad exhaust pipes, as well as a new body painted spoiler. An optional AMG styling package adds a different front splitter, broader side skirts and gloss black detailing.

As well as the new body enhancements, Mercedes has added a range of AMG aero wheels. These have been optimised in the wind tunnel to improve air flow around the wheels, offering the best blend of aerodynamics, weight and brake cooling, along with improved performance and reduced fuel consumption. 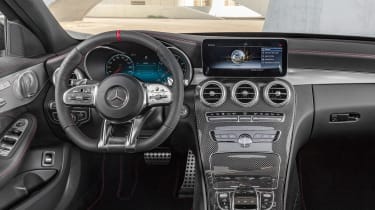 Inside, the C 43 gets optional AMG Performance seats with integrated head restraints, as well as new materials and trim finishes. The interior can be specified in Merc’s ARTICO man-made leather, while the black roof lining and red seat belts add to the car’s sporty persona. Those after a bit more individualisation can choose open-pore wood, carbon fibre or aluminium trim for the centre console.

Mercedes has updated the infotainment options for 2018, too, now offering the fully digital widescreen dials from the larger E-Class. This was first shown on the standard C-Class last month, bringing a 12.3-inch screen in place of the C’s normal analogue dials. A new AMG steering wheel completes the look.

UK prices and specs will be announced later, along with official fuel economy and emissions data. However, we expect a small jump from the saloon’s current £45,830 list price, while the C 43 Estate is likely to continue to cost around £1,200 more. Revised versions of the AMG-fettled Coupe and Cabriolet will appear further down the line.

Welcome to our Geneva Motor Show hub page, scroll down for all our Geneva content...
Mercedes C-Class review