Saloon and estate prices for Merc’s new C-Class have been confirmed, with first deliveries set for July 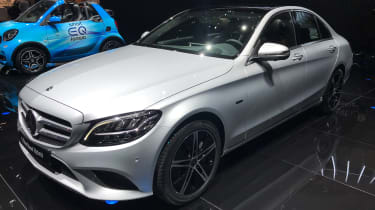 Mercedes has released full prices and specs for the revised C-Class saloon and estate. The wide-ranging updates include improved infotainment and connectivity systems and new engines.

It remains on the same platform as before, so the styling receives only subtle changes as opposed to a major overhaul. New bumpers, revised headlights and tail-lamps feature; the standard configuration at the front will be halogen lights with LED daytime running lights, but with a full LED set-up available as an option.

• Opinion: “Continual improvement is crucial to keeping a car on top”

The dashboard design remains much the same as before too, but the infotainment system has been completely overhauled. The outgoing car’s seven-inch screen has been ditched for a more advanced 10.25-inch set-up that’s standard throughout the range. Some of the infotainment functions can be controlled through touch-sensitive panels on the steering wheel, a set-up directly carried over from the larger E-Class and S-Class. 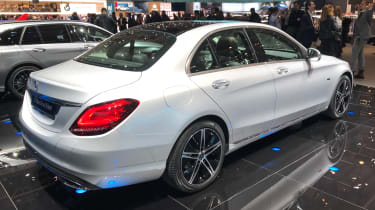 In addition to the display, all C-Class models are equipped with a reversing camera, heated front seats, satellite navigation and adaptive cruise control. The cabin also gets what the marque calls ‘Energizing Comfort Control’; a system which uses the air-conditioning, perfumed scents, seat heating, ventilation and massage functions to improve driver wellbeing.

From launch, the C-Class will be offered with a choice of one diesel and two petrol engines, with more units expected to follow at a later date. These include the OM654 four-cylinder 2.0-litre turbodiesel already featured in the E-Class, which in this installation produces 191bhp, 400Nm of torque, and returns a claimed 61.4mpg.

A 1.5-litre petrol unit is all-new, assisted by a 48-volt hybrid set-up which adds an additional 14bhp of electrical shove. Total system output stands at 181bhp and 280Nm, returning 46.3mpg. Both rear and all-wheel drive options are offered.

The range will initially be topped by the AMG C 43. The 3.0-litre V6 biturbo makes 385bhp and 520Nm - increases of 23bhp and 44Nm respectively. Deployed to the road through all four wheels, the C 43 can cover the 0-62mph sprint in 4.7 seconds in saloon form, taking a tenth longer in estate guise. 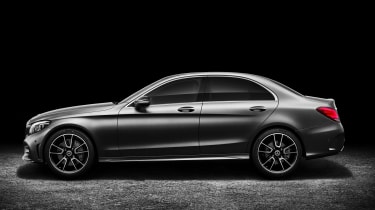 The £33,180 starting price means the revised C-Class carries a near £4,000 premium over the outgoing car, but this is due to both increased equipment levels in the base models and the hybrid assistance of the entry level C 200. The facelifted version of Merc’s BMW 3 Series challenger is priced from £33,180 and available to order now, with first deliveries due in July.

“Continual improvement is crucial to keeping a car on top”. Click through to page two to get our view on the facelifted Mercedes C-Class...