It might have been around for more than three years, but the Mercedes Sports Coupe is still a rare sight on British roads. Could this be because it failed to live up to its name and was not very sporty? And will a facelift and a few changes under the skin alter this? 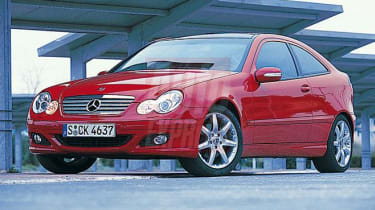 With a tidier look, more generous equipment and a sportier driving experience, the Sports Coupe can at last claim to be a car for enthusiasts rather than those who can't afford a bigger Mercedes coup�. But such stylish lines still come at a price - and it seems very high compared to rivals.

It might have been around for more than three years, but the Mercedes Sports Coupe is still a rare sight on British roads. Could this be because it failed to live up to its name and was not very sporty? And will a facelift and a few changes under the skin alter this?

Aside from the restyled front and rear, the latest Sports Coupe features what Mercedes calls its Direct Control package. In short, this sees the car sat on a wider track, the suspension softened and the steering made more direct.

Engineers have also tweaked the manual gearbox, changing from flimsy cable connections between lever and cogs to a solid rod arrangement, which gives better feel. On sportier models, the throw has even been shortened.

But does all this make much difference from behind the wheel? While the previous Sports Coupe felt sloppy, the new model turns in with more purpose and has greater poise in corners. The steering weights up nicely, yet still manages to be light at parking speeds.

Our car was badged a C230K, but it has a 1.8-litre engine. With the help of a supercharger, the unit boasts 192bhp and 260Nm of torque, so progress is swift. Mercedes quotes a 0-60mph dash time of 8.1 seconds and a 150mph top speed - not bad for a 1.8. Combined with the revised handling, this makes the car much more fun to drive than before.

But the Sports Coupe is not without its problems. Changing from second to third gear isn't as smooth as it should be, while the standard stability control seems to cut in earlier than is necessary.

Yet while Mercedes is keen to emphasise how the car is aimed at keen drivers, passengers will also notice a difference. A fresh centre console has been fitted and - at last - all models get standard automatic climate control.

The designers have also come up with some novel touches, including a storage bin between the front seats that opens three ways for easy access. All models feature a multi-function steering wheel, electric folding mirrors and auto-dimming rear view mirror as standard.

So things are looking good for the Sports Coupe - until you see the price. It's a capable car, and if you really must buy a Mercedes it won't disappoint. But the similarly specified Audi A3 3.2-litre V6 is cheaper and faster - and this is just one of a number of rivals that will give the Merc a run for its money.