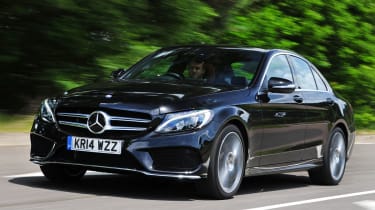 In terms of interior quality and design, the Mercedes C-Class is superb. But from behind the wheel it’s less successful. Our AMG Line model with 19-inch wheels and air suspension floats along the motorway, but crashes over bumps, while the diesel lacks refinement. We look forward to testing better specced models, which could achieve another star.

Our first drive of the new Mercedes C-Class in the south of France earlier in the year revealed a polished executive car worthy of its ‘baby Mercedes S-Class’ billing.

But the acid test for the new C Class – since Mercedes prides itself on delivering class leading ride quality – was always going to be crumbling British roads.

As we’ve come to expect, the suspension options are complicated. The new Mercedes C-Class comes in three trim levels – SE, Sport and AMG Line – and all get adaptive dampers as standard, which are controlled through the five-stage Agility Select switch.

Sport and AMG Line have suspension lowered by 15mm, the latter slightly firmer than the former, while  for around £900 you can opt for self-levelling airMATIC air suspension (a first in this class), as on our C220 SE BlueTEC model test car.

On the motorway, where you tend to encounter gentle low-frequency bumps, the air suspension is immediately apparent, delivering that wonderful floaty sensation that characterises the bigger Mercedes S-Class.

However, on less-than-perfect surfaces, such as city roads scarred by countless repairs, there’s a brittleness to the ride of the Mercedes C-Class that we weren’t expecting. It wasn’t long before we were wincing in anticipation when we spotted a pothole up ahead. 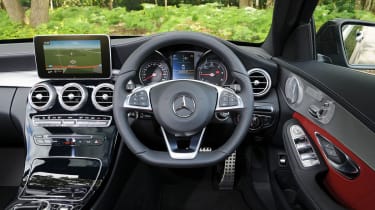 To be fair, our car had optional 19-inch alloys; an SE model with 16-inch wheels and standard steel springs is sure to fare better. But it’s a black mark all the same.

Under the bonnet of our C220 BlueTEC is the familiar 168bhp 2.1-litre four-cylinder diesel which we’ve criticised for its lack of refinement in the past. Sadly, it’s no different in the C-Class  – it’s audible at idle and reaches an intrusive crescendo under hard acceleration.

This is a shame because performance feels brisk, with 0-62mph taking just 7.4 seconds (six-tenths  faster than in a BMW 320d). Plus, the 65.7mpg fuel economy and 117g/km CO2 emissions (113g/km with smaller 18-inch wheels) are slightly better than a 320d M Sport automatic.

Wind and road noise in the new C-Class are well suppressed and the seven-speed auto  is smooth as ever in Comfort mode, although in Sport and Sport+ it tends to hold lower ratios for too long, ampifying the rumble from the engine bay.

It’s obvious Mercedes has prioritised comfort ahead of handling, which is a refreshing approach, so the slightly synthetic feeling steering is noticeably lighter than in its arch rival - the BMW 3 Series. The ratio quickens the further off centre you turn it, letting you dart into corners with a flick of the wrists. Apply too much lock, though, and there’s understeer where the front tyres of the BMW would just would dig in.

Luckily we’ve saved the best for last, because Mercedes has made the interior of the new C-Class truly stunning. The design is dominated by the 8.4-inch tablet-like screen and SLS AMG-style bullseye vents, but it’s not just this that puts the 3 Series and Audi A4 in the shade; the quality of the leather, brushed aluminium and piano black trim sets new standards in the class.

In the back, the new C-Class doesn't have acres of room, but four adults can easily travel in style and while the 480-litre boot is only average, it has a usefully wide opening, so loading large bags is easier than ever.

The C-Class is handsome, from its arched boot lip and converging creases along the sides to the long bonnet and prominent grille – it’s unashamedly an S-Class in miniature. That’s why it’s so frustrating the driving experience can’t hit the luxury heights the looks promise.