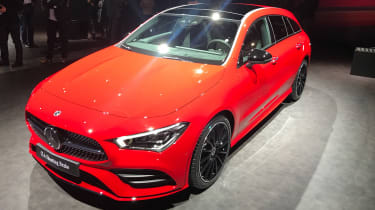 This is the Mercedes CLA Shooting Brake, which made its debut at the 2019 Geneva Motor Show just a few months after its saloon cousin starred at the Consumer Electronics Show in Las Vegas.

As with the last-generation model, the Shooting Brake is a swoopy estate car that’s focused as much on styling and looks as it is on outright practicality. It sits on the same platform as the CLA saloon and latest A-Class, and will share many of those models’ engines and transmissions.

The car is 48mm longer and 53mm wider than before, but two millimetres lower – so it has a more purposeful stance overall. The front end has a similar look to the A-Class, but the longer, tapering roofline makes the vehicle instantly recognisible as a Shooting Brake instead of an out-and-out estate. Mercedes says that wheel sizes from 16 to 19 inches will be offered – although it’s feasible that the UK will not get the smallest of these options when our trim levels are finalised. 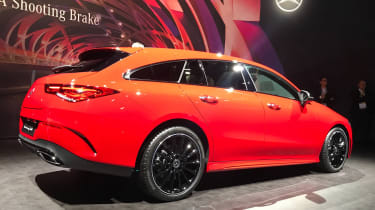 Mercedes hasn’t announced the full engine line-up for the car, but it has said that the range-topping edition at launch will be the CLA 250, which has 221bhp and 350Nm of torque, and a seven-speed dual-clutch transmission. It’s a near certainty, though, that a hot CLA 35 and CLA 45 are already in the pipeline from the Mercedes-AMG performance division – and that there will also be lesser editions with 1.6-litre petrol and 1.5-litre diesel power. 4MATIC four-wheel drive is likely to make an appearance, too, further cementing the Shooting Brake's purpose as a lifestyle estate more than a practical one.

Inside, the Shooting Brake benefits from the same cabin upgrades as the A-Class. So there’s more shoulder, head and elbow room for passengers, thanks in part to a wheelbase that's 30mm longer than before. The boot capacity with the rear seats in place is 505 litres, a gain of 10 litres over the outgoing CLA Shooting Brake – and the width of the loading aperture is 871 millimetres, significantly up on the 635 millimetres previously offered.

The car also gets Mercedes’ latest MBUX infotainment system, including the digital instrument panel, ‘Hey Mercedes’ voice command functionality and the option of a colour head-up display with augmented reality for navigation instructions, all of which have already been seen in the A-Class.

The new CLA Shooting Brake will be built in Hungary and it should be for sale in dealers in the final quarter of the year. There’s no word yet on pricing or specs, but we’d expect it to have only a modest increase over the outgoing version, and a slight premium over the four-door CLA.

Click here for all the latest on the regular Mercedes CLA...

Welcome to our Geneva Motor Show hub page, scroll down for all our Geneva content...
Mercedes A-Class review 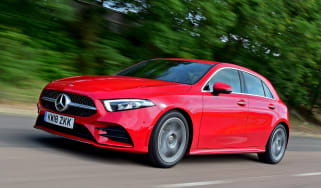