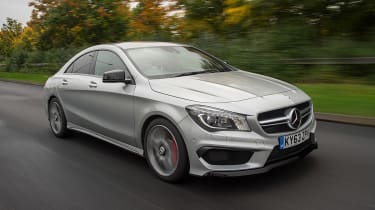 The Mercedes CLA 45 AMG might bring scintillating performance and a boost in boot space, but the £3,000 premium over the A45 AMG is hard to stomach unless you’re really sold on the CLA’s style. It feels a bit less raucous than its hatchback sibling, too, and if you start ticking too many options boxes it gets scarily expensive. There’s a lot to like, though, if you can afford the steep asking price.

Some thought Mercedes had lost its mind when it started to build four-cylinder AMG models, but the Mercedes CLA 45 AMG and A45 prove that tuning partner AMG understands more than just V8s.

Aside from a different body, the A45 and CLA 45 are all but identical. All that power is delivered to all four wheels, meaning traction isn’t an issue – even on damp roads.

The acceleration is entertaining, too, each gearshift signalled by an appealing 'braaap’ from the £460 AMG Performance exhaust. Given the brittle ride of the standard CLA, we approached the AMG version with a fair degree of caution.

Yet despite the 19-inch alloys and suspension tuned for greater roll control and stiffness, the ride remains on the right side of acceptable. It’s undoubtedly firm, but in a manner that’s more sporting than harsh, and the car’s composure over the sort of testing tarmac that makes up the UK’s A and B-roads is surprisingly impressive.

The steering is decently weighted, too, even if the CLA’s responses aren’t quite as quick as the A45’s. In fact, the two cars feel distinct enough to appeal to different audiences.

The CLA adds a touch more comfort and space, although the rear seats are rather compromised in both legroom and ease of access. The 470-litre boot’s more spacious, too, but it’s unlikely a CLA 45 AMG buyer will choose it on practicality alone.

The driving position is fine, and the cabin design, fit and finish are significantly better than in standard cars. AMG badging, sports seats and unique instrumentation only add to that appeal.

One problem, though, is that the CLA’s price quickly creeps up when you add options – you’d have to really love its looks to pick it over the A45 AMG.