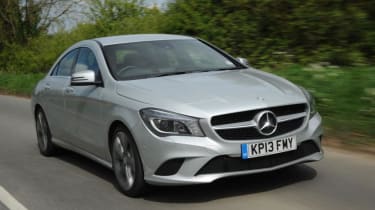 It’s based on the A-Class hatch, but on the face of it the CLA doesn’t actually make a great deal of sense, because prices are higher and it offers substantially less practicality, unless you buy a Shooting Brake. But the standard car’s saloon configuration is still relatively usable, especially if you don’t need to carry lots of people or luggage. Even the entry-level 1.6-litre cars (petrol or diesel) are perky enough, while the bigger engines provide swift progress without being unduly thirsty. However, while Mercedes doesn’t offer spartan models any more, it does do relatively poorly equipped; whatever you buy, make sure the original owner didn’t scrimp on options or trim level.

There was a time when Mercedes was happy to offer a few saloons of different sizes, a couple of coupés and convertibles, plus an estate or two for good measure. Then it started to blend segments, and its range got ever-more complicated.

Perhaps the best example of this is the Mercedes CLA. It followed in the footsteps of the bigger CLS, which blurred the boundaries between coupé and saloon, and was also offered as a Shooting Brake estate. The success of that car led to the smaller version, which was more accessible thanks to its A-Class running gear and lower prices, although it was hardly what you’d call a bargain. That didn’t stop the CLA from selling well though, especially to status- and style-conscious fleet buyers. 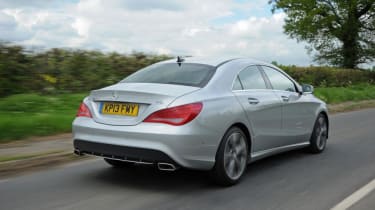 The CLA 180, CLA 250 and CLA 200 d came with a six-speed manual gearbox, and a seven-speed auto was offered as an option; all other CLAs were fitted with the auto as standard, with no manual option. 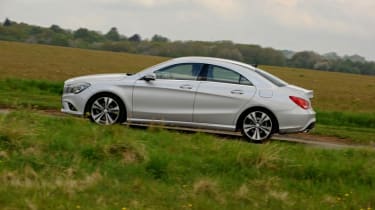 Be on the lookout for cars fitted with the Exclusive package, which adds comfort features such as heated front seats and upgraded interior trim. Other options worth having include the rear camera, Harman/ Kardon hi-fi, DAB radio (standard on the CLA 45 AMG) and panoramic sliding sunroof.

Alternatives to the Mercedes CLA

In concept, the Volkswagen CC is perhaps closest to the CLA, because it’s also a saloon with a coupé-like silhouette – but the VW is 300mm longer, so it’s a size up. The Audi A3 Saloon – while not as sleek as the CLA – is also well worth a look.

The five-door Audi A5 Sportback is slightly longer than the CLA, and it adds hatchback practicality to the mix. Like the CC and A3 it’s good to drive, has a plush interior, is well equipped and comes with some excellent engines, too. If you’re really keen to have a saloon, you could opt for an Audi A4 which is also only slightly longer than the Merc, while the BMW 3 Series is about the same size. With its conventional saloon silhouette you get improved rear seat space and, if you want extra usability without resorting to an estate, there’s always the five-door BMW 3 Series GT.

All examples of the CLA come with a tyre sealant kit rather than a spare wheel of any size – the latter isn’t even an optional extra.

18-inch wheels provide as firm a ride as you’re likely to want; the optional 19-inch alloys and sport suspension really are too firm for comfort.

Make sure the filler flap opens as it should. Reports of faulty solenoids and caps that get stuck shut are not unknown. 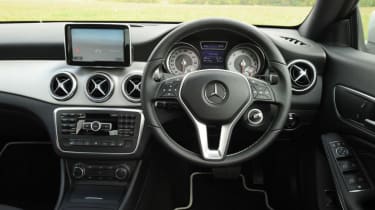 The CLA uses the same dash as the A-Class so it’s quite busy, but you soon get used to it. Build quality is good and most of the materials look and feel high-quality, but some cost cutting is evident up close. It’s easy to get comfy up front and, while rear-seat legroom is fine, headroom is compromised due to the sloping roof. To aid practicality the CLA saloon has a 60:40 split-folding rear seat.

All CLAs need servicing every 12 months or 15,500 miles, alternating between minor and major. Costs vary, but you can get quotes from mymercedesservice.co.uk.

The CLA has been subject to 25 recalls, most of which also affected other Mercedes. The first two came in July 2014 for loose seatbelt anchors and faulty airbags; the most recent was in February 2019 for calibration of seat sensors for the airbags and belts. In between came recalls for faulty driveshafts, brake servo errors and much more, so do check any potential purchase is up to date.

The CLA hasn’t featured in Driver Power, but the platform- sharing A-Class Mk3 appeared in the 2017 and 2018 New Car surveys, placing 69th and 56th respectively. It scores well for its exterior fit and finish, with the only other top 50 scores for running costs and reliability. All other scores, from safety and practicality to engines and infotainment, are outside of the top 50.