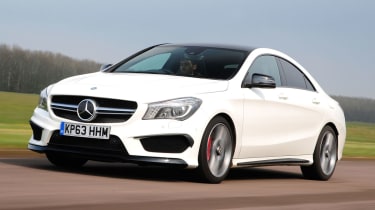 Like with many new cars, the introduction of Merc's CLA inevitably spawned a high-performance AMG version. The Mercedes CLA 45 AMG is now available as both a four-door coupe saloon, as well as a slightly more practical five-door Shooting Brake estate.

The CLA AMG boasts the world's most powerful production four-cylinder engine, with a whopping 355bhp and 450Nm of torque. That's more power per litre than any other production car on the market, and feels suitably rapid in a striaght line. All cars gets permanent four-wheel drive for unrivalled grip, with power transferred via a seven-speed DCT dual clutch gearbox.

Order the optional performance exhaust and upshifts are accompanied by ear-splitting pops, while downshifts are punctuated with crackles. Specific settings for the steering and gearbox, plus bigger brakes and firmer suspension make sure the handling is rock solid, while an AMG-specific makeover ups the aggression, inside and out.

With a monstrous 355bhp output, rapid-fire twin-clutch gearbox and launch control, it’s no surprise that the Mercedes CLA 45 blitzed the 0-60mph sprint in 4.5 seconds. The Shooting Brake estate is ever-so-slightly slower, completing the same sprint in 4.7 seconds.

However, those figures only tell half the story, because the CLA 45 AMG's tall gearing and surprising amount of turbo lag suffered by the CLA 45 AMG’s 2.0-litre engine weren't expected.

While the Mercedes CLA 45 AMG's four-cylinder engine isn’t as characterful as AMG’s trademark V8s, the exhaust emits a racy crackle with each upshift. Better still, the uprated chassis has no trouble harnessing the engine’s explosive performance. The lowered and stiffened suspension delivers rock-solid body control, and the 4MATIC all-wheel-drive transmission provides limpet-like traction, even in slippery conditions. 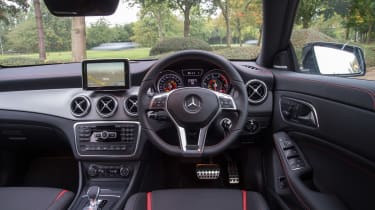 The steering doesn’t offer massive amounts of feedback, but it’s extremely precise and well weighted. As a result, the Mercedes can carry huge speed through a series of corners and continues to grip hard where the S3 eventually starts to suffer with understeer.

Unfortunately, the trade-off for this acrobatic agility is a very stiff ride. Unlike the S3, the AMG doesn’t have the option of adaptive dampers, and the standard setup is firm at low speed and a little fidgety on motorways. Still, there’s very little wind noise, while a tall top gear keeps the engine revs at a relaxed 1,800rpm at 70mph.

On full-bore gearchanges the exhaust sounds great, but there isn't the same crackles and pops on downshifts that you get with the A45 - a deliberate move to give the CLA a marginally more laid-back character.

The £42,270 standard CLA 45 AMG is £9,025 more expensive than an Audi S3, and it costs more to run. The Shooting Brake estate commands an £850 premium, and our experts predict a loss of around 50 per cent over three years – so while it's not the best, it's still pretty good.

Company car drivers will be hit hard when choosing the Mercedes, because the combination of that high price and 165g/km CO2 emissions results in some big Benefit in Kind bills. Owners will also have to budget for plenty of fuel, as the car returned 24.8mpg during its time on test, despite Mercedes claiming an official figure of 39.8mpg.

Fuel economy isn't affected by the Shooting Brake body though, with the estate returning identical fuel economy and CO2 figures.

Eye-catching looks are a key selling point of the CLA and CLA Shooting Brake – and the AMG model is no exception. The sweeping side creases and tapered rear end ape those of the larger CLS, and the nose is taken directly from the A-Class hatchback on which the CLA is based. The estate version is virtually identical from the front, but gets a higher roofline and hatchback-style boot for improved practicality.

The Mercedes CLA 45 AMG looks a little awkward from some angles, but there’s no doubt this car attracts more attention than the similarly powered, yet understated Audi S3. As expected there are a number of racy AMG additions, including 19-inch five-spoke alloy wheels (18-inch wheel can be specified as a no-cost option), deeper front and rear bumpers, gloss black trim for the side skirts and distinctive squared-off twin tailpipes.

The high-performance upgrades continue inside, where you’ll find a number of AMG logos, high-backed Recaro front bucket seats plus a sporty red finish for the trim stitching and seatbelts. However, it’s a bit cheeky that Mercedes charges £570 for the metal shift paddles and bespoke gearlever that are standard on other AMG models.

Elsewhere in the CLA 45 AMG, it’s all typical CLA - you get a smart design dominated by the SLS-inspired eyeball air vents, tablet-style screen and intuitive rotary controller for the COMAND infotainment system. On the face of things then, it can match the similar Audi for interior quality.

However, look closely and you’ll find a few hard plastics dotted around the cabin, so the overall finish isn’t quite up to the same high standard.

The low-slung driving position gives the Mercedes CLA 45 AMG a sporty feel, but anyone should be able to get comfortable as there’s plenty of seat and steering wheel adjustment, plus the Recaros are supremely supportive.

It’s not such great news for rear passengers, though, as the coupe-style roofline restricts space, and it’s easy to bang your head on the low door frame as you get in and out. That’s not all - the small side windows and dark headlining material combine to make the cabin feel claustrophobic.

However, Mercedes provides plenty of luggage space, thanks to a 470-litre boot and standard split-fold rear seats. A storage package for around £170 adds parcel nets, a 12V socket in the passenger footwell, stowage boxes under the front seats and a sunglasses holder in the overhead panel.

For an extra £850, you can opt for the Mercedes CLA 45 AMG Shooting Brake estate. With 40mm more rear headroom, and 25 litres more boot space, it is slightly more practical overall. Don't be fooled though, the sloped roofline and tight appeture means loading bulky items is still a bit tricky.

the A-Class, on which the CLA is based, has been in showrooms since 2012, so any early technicalissues should have been ironed out by now. As we’ve seen, Mercedes has also performed better than Audi in our Driver Power manufacturer and dealer charts.

Standard safety kit includes nine airbags and Isofix child seat fixings, plus a driver-fatigue sensor. Our car was fitted with an optional Lane Tracking Pack which costs around £770, but adds blind-spot monitoring and lane-keep assist. 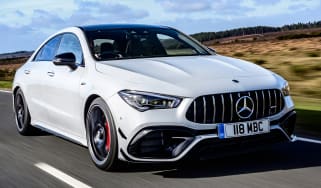 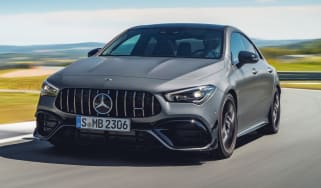 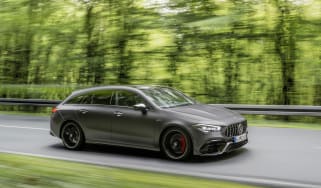 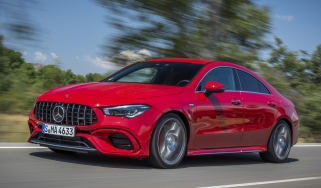 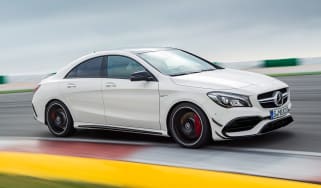 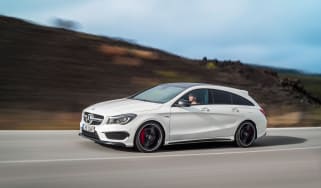 Mercedes CLA and GLA 45 AMG to get power boost 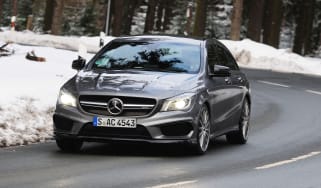 A small estate with huge performance, the 355bhp Mercedes-AMG CLA Shooting Brake punches above its weight
Mercedes CLA 45 AMG: what's it like to live with? (video) 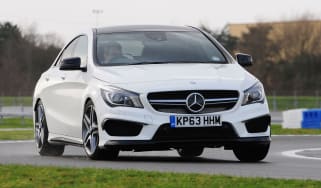 Mercedes CLA 45 AMG: what's it like to live with? (video) 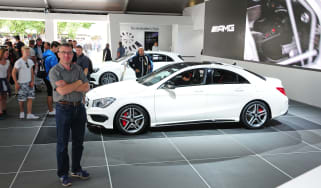 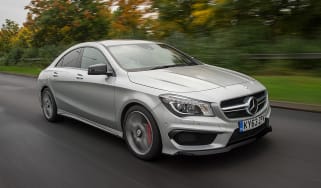 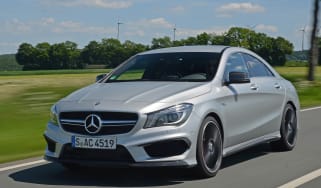 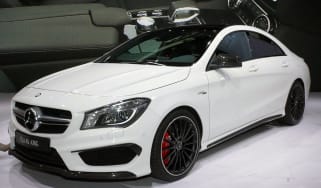 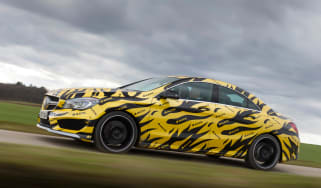