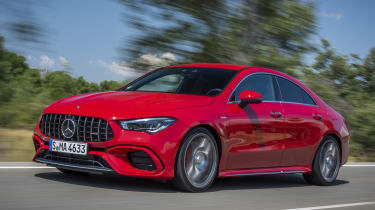 The Mercedes-AMG CLA 45 S is a hugely talented and desirable piece of kit, albeit one that doesn’t come cheap. Choosing it over the A 45 S ultimately comes down to whether you prefer the way it looks, but its performance, useability and agility put it ahead of the Audi RS 3 saloon.

Over £50,000 is a lot to pay for a hot hatch, even one as good as the new Mercedes-AMG A 45 S. But if you’re willing to part with a further £2,000 (est), you can upgrade to the more elegant CLA 45 S - and because Mercedes calls it a coupe, it should feel like a car more befitting the price tag. It certainly looks it.

It sits 5mm lower than the A 45 but the extended rear end and gently sloping roofline give it a more graceful shape. And, of course, whether you go for the CLA over the A 45 is largely going to come down to which you prefer the look of, as both are mechanically identical, aside from a slightly wider front track and tyres on the four-door coupe.

Only the most potent CLA 45 S will be sold in the UK. It uses a 415bhp 2.0-litre four-cylinder engine – the most powerful of its kind – hooked up to an eight-speed dual-clutch gearbox. All cars are four-wheel drive, but in day-to-day driving power is sent only to the front axle; up to 50 per cent of the engine's power can be sent to the rear wheels when required.

However, it’s a significantly more sophisticated system than before; the newly developed 4MATIC+ system features a pair of clutches on the rear axle, sending a constantly variable amount of power to each wheel. The system is designed to make the CLA 45 more adjustable, but has also allowed engineers to develop a new drift mode, which comes as standard on all UK models. It’s a complex piece of kit and one that had a development budget in the ‘tens of millions’ alone. 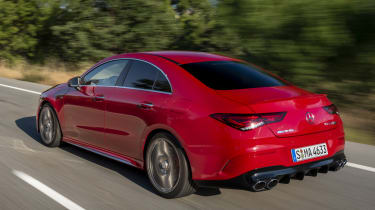 The suspension set-up has also been overhauled, with engineers developing new frequency-selective shock absorbers designed to keep the car more stable at high speed and reduce body roll in corners. And that comes on top of AMG’s familiar adaptive damping system that gives buyers three set-ups – ranging from comfortable to sporty.

On the move, even over the same stretches of road, the CLA feels identical to its hatchback relation. It immediately feels like a more comfortable car to spend time in comparison to its predecessor; the ride still has a firm edge, but it’s definitely more forgiving. The CLA’s extra bodywork brings with it a 50kg weight penalty - the 0-62mph dropping by one tenth over the A 45, to four seconds dead. It’s still absurdly fast; the trick four-wheel drive system deploying power exactly where it needs to go and exactly the right time to maximise the car’s potential.

Carry speed through a corner and there’s an initial touch of understeer before power is sent rearwards to neutralise the car. The steering is a bit on the light side and there’s not much feel, but the amount of grip from the four-wheel drive system compensates as you can sense exactly what’s going on beneath you.

The only area the CLA does differ over that hatch is inside; the boot is 15 litres larger at 470 litres, but on the flip side the compromised opening means it isn’t quite as practical outright. Furthermore, headroom for rear passengers is a little tighter.