A small estate with huge performance, the 355bhp Mercedes-AMG CLA Shooting Brake punches above its weight 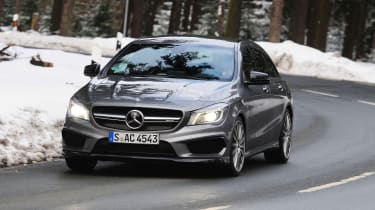 The AMG version of the Shooting Brake arguably makes more sense than the standard car. It’s sharper in the bends, less jittery on the motorway, and the turbocharged four-cylinder is an absolute joy. So long as practicality isn’t your main concern, and you like the looks, the CLA 45 AMG Shooting Brake is an interesting and satisfying performance package.

If the standard Mercedes CLA Shooting Brakes are too dull for you then there’s only one other option - the CLA 45 AMG Shooting Brake. It carries over the 355bhp, 2.0-litre turbocharged four-cylinder petrol engine from the AMG saloon, albeit with lightly revised spring and damper rates to cope with the marginally heavier body. The extra 45kg makes very little impact on the car’s performance, increasing the 0-62mph time by just a tenth of a second. Top speed is still limited to 155mph, and it gets exactly the same 450Nm of torque. It feels just as eager to rev, and pulls cleanly thanks to the standard four-wheel drive.

Our car was on winter tyres, which came in useful as we climbed the hills above Frankfurt – but they did have a habit of pushing the car slightly wide on dryer roads. That said, when we ran a standard CLA 45 for six months last summer, grip was never an issue. 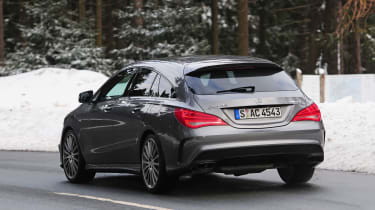 All cars come with the same seven-speed AMG dual-clutch gearbox as the saloon, helping the CLA 45 emit a sweet sound from the £460 optional sports exhaust – especially when you upshift under full throttle. The suspension is understandably firmer than the standard CLA, but that plays to the AMG’s advantage, feeling much taughter in the bends but without feeling any more uncomfortable on the motorway. The steering is well weighted and the optional Alcantara steering wheel feels perfect in your hands. It’s far more composed than the diesel, with very little body roll. 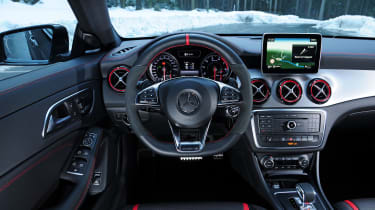 Of course, you’ll have to stomach the higher fuel bills, but that shouldn’t prove too hard when you consider the performance on offer. Mercedes says the AMG Shooting Brake will return 39.8mpg and emit 165g/km of CO2 – not bad for a 355bhp ‘estate’ car. Spec the no-cost 18-inch wheels (instead of the standard 19s) and this figure drops to 161g/km.

Anyone who’s sat in the standard CLA AMG will feel right at home in the Shooting Brake. All cars also come with artificial leather sports seats, red belts, AMG door sills and stainless steel pedals. Buyers can add a carbon-fibre package for £2,550 or an AMG Exclusive package for £1,640, which adds better seats and more leather. The OrangeArt accents from the diesel CLA are also available for around £1,000, and are well worth the extra cash. 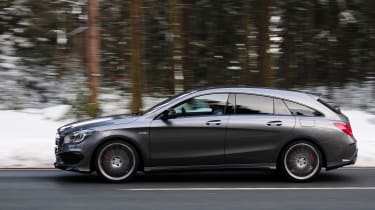 Pleasingly, all the practicality improvements of the standard Shooting Brake are carried over to the AMG. That means it gets the same higher roofline and bigger boot, but also the same compromised opening – cementing this car as a high-power fashion statement rather than an out-and-out load-lugger.

That said, it’s a hoot to drive, and still features the most powerful series-production turbo four-pot in the world. Arguably, it makes more sense than the standard car, but at more than £43,000, you’d have to really love the styling to take the plunge.