Audi A3 vs Mercedes CLA 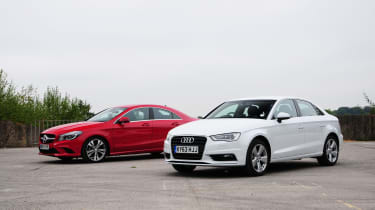 Germany’s premium brands continue to exploit every niche of the car market in the pursuit of sales. And Audi is bidding to widen the appeal of its popular A3 range with the launch of a new Saloon model.

The four-door A3 is developed primarily for the Chinese and North American markets, where hatches aren’t so popular. But Audi’s first compact saloon is on sale here, too.

It’s lower and wider than the three-door A3, with a bigger boot than the five-door A3 Sportback. At launch, there are 1.4 and 1.8-litre TFSI petrol engines, plus a 2.0 TDI diesel. We test the 1.4 TFSI in Sport trim, with clever Cylinder on Demand tech.

Also appealing to downsizing premium saloon buyers is Mercedes, with its A-Class-based CLA. This promises the style of the CLS (see Page 62) at a fraction of the cost. The CLA 220 CDI diesel lost out to VW’s bigger CC in Issue 1,276, so the petrol CLA 180 is out to restore the four-door coupé’s honour.

Both our test cars use four-cylinder turbos, but in spite of its lower capacity, the 1.4 TFSI in the A3 has more power and torque than the 1.6-litre in the CLA. The seven-speed S tronic gearbox’s shorter ratios help, but the Audi is faster and feels more responsive. In contrast, the CLA 180’s engine is slow to rev, has a dull throttle response and needs to be worked hard. The Mercedes is 145kg heavier as well, which contributes to its performance deficit.

Audi and Mercedes have followed different approaches here. The more conventional Audi roofline delivers better rear passenger space, while the Mercedes offers something a little different in terms of styling and desirability.

Both cars have stop-start, but clever Cylinder on Demand tech keeps the Audi’s emissions to 109g/km – that’s 21g/km less than in the CLA and only 2g/km shy of the A3 Saloon 2.0 TDI. You can’t feel the system working, but when the engine’s under low loads, cylinders two and three shut down, plus the intake and exhaust valves close to prevent charge cycle losses. This helped us achieve 35.7mpg in the Audi, to the Merc’s 32.0mpg – and given the pace and refinement, we’d choose the TFSI over the TDI.

Since its introduction in 1996, the A3 has played a huge part in Audi’s success story. Over 350,000 examples have found homes in the UK, while last year 30,000 rolled out of showrooms up and down the country, making this car the company’s biggest seller on these shores. The launch of the first-ever A3 Saloon adds another string to this very accomplished premium compact car’s bow - it's an attractive addition to the A3 range. It drives like the hatch and Sportback, plus has similar economy and quality, yet adds extra upmarket appeal. In fact, it’s a sensible and top-value alternative to the bigger and more costly Audi A4. This clean, refined and fast 1.4 TFSI is our pick of the range.

In the new A-Class and the CLA, Mercedes has created desirable and stylish small cars with which to take the fight to Audi and BMW. The CLA range comprises a choice of two petrol engines and two diesels, plus the flagship CLA 45 AMG, while looks inspired by the classy CLS four-door coupé give the new premium compact saloon plenty of upmarket kerb appeal. However, the CLA 180 isn’t as powerful as the Audi, plus it’s dirtier, while a firm ride takes the edge off the driving experience.