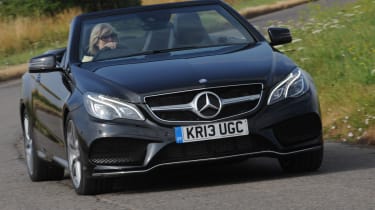 With the E-Class, Mercedes has boldly bucked the growing trend for folding hardtops and instead used a more traditional fabric roof. It comes with a main advantage of extra boot space, but also folds at speeds of up to 25mph, so drivers won’t be caught out by sudden showers. Five engines and two trim levels give buyers plenty of choice, including three diesel options.

The innovative 'Aircap' wind deflector on the Mercedes E-Class Cabriolet is one of a host of clever features that make it one of the easiest cabriolets to live with on the market. Its clever design keeps draughts at bay in the cabin and on the facelifted car – introduced in June 2013 – the Aircap became fully automatic, rising at speeds of above 25mph and lowering below 9mph.

The facelifted model saw each engine become more efficient, and a new E400 was introduced at the top of the range to replace the 4.7-litre V8-powered E500. The E400 has similar performance but has a much more frugal 3.0-litre bi-turbo V6 under the bonnet instead. Now there are just two trim levels to choose from - SE and the sportier AMG Sport - which can be recognised by its aggressive body kit and larger alloy wheels

The Mercedes E-Class Cabriolet offers buyers efficiency and performance, with five different engines available. They are taken from the rest of the range, with the petrol versions delivering from 181bhp to 328bhp, and the diesels giving 168bhp to 248bhp. These aren’t the most powerful engines in the convertible category, but they do deliver excellent economy figures. Apart from the entry-level E220 CDI diesel they all come fitted with a seven-speed automatic gearbox which makes for a relaxing drive but is not as responsive as the latest transmissions from BMW and Audi when driving quickly. They are also incredibly smooth and suit the cruising nature of the E-Class. The biggest-seller is the diesel E350 CDI, and it's easy to see why, thanks to it's excellent refinement and satisfying mid-range punch. Handling is good too, but the E-Class is more of a boulevard cruiser than a back-road blaster. However the firmer suspension of the AMG Sport versions does make for an unsettled ride on rougher surfaces.

Despite the impressive fuel economy of the engines the facelifted car does cost around £2,000 more than its predecessor, but Mercedes says that it has added in a lot more than £2,000 worth of equipment, so it's actually better value for money overall. All the four-cylinder diesel engines are very efficient by class standards, returning close to 60mpg on the combined cycle and emitting around 130g/km of C02 depending on the model. However nn the secondhand market, the E-Class Cabriolet suffers heavier depreciation than some of its rivals, and servicing charges are expensive. Combine that with the higher initial cost and hefty insurance premiums and the as a buyer you do end up paying extra for the premium image that goes with that prestigious badge.

The Mercedes E-Class Cabriolet is larger than most drop-top models and can seat four adults in relative comfort. The facelifted car features the same modern touches as the saloon and estate, with single piece LED headlights front and rear, a lower and more dramatic air-intake at the front and extra chrome trim on the bumpers too. As with the Audi A5 Cabriolet, Mercedes has opted for a traditional fabric roof on the E-Class, which gives the car a classic cabriolet look. In the cabin, everything is beautifully arranged and well designed and it all looks and feels very expensive. The facelifted model gets more standard equipment than ever and the trims have been updated with metal finishes on most of the switch gear. Prices have also gone up though - and the E-Class will set you back more than its nearest German rivals from Audi and BMW.

The E-Class Cabriolet is surprisingly practical, thanks to a large array of storage. The boot is fairly shallow, but even with the roof down it’ll hold a decent amount of luggage – one of the benefits of a fabric roof. A through-load hatch into the passenger compartment even allows you to pack your skis on a winter holiday. There is also plenty of storage available in the large glovebox, a lidded compartment in the centre console and deep door pockets. Legroom is slightly cramped, but four adults can travel in relative comfort, as long as the driver and front passenger don’t like to sit too far back in the cabin. Unlike the Audi A5 though it only comes with the option of rear-wheel drive - so in wet and wintry conditions it won't have as much grip or stability as a car wearing a 'Quattro' badge.

The E-Class should live up to the German manufacturer’s solid reputation. Safety equipment includes some complex technology which anticipates accidents and responds accordingly. This includes a system that monitors the driver and if it spots any signs of drowsiness, it suggests the driver should take a break by flashing up a cup of coffee sign and making a beeping noise. Anti-lock brakes, airbags and electronic stability control all feature, too. This is the first Mercedes cabriolet with headbags mounted in the doors to boost protection in case of a side impact. The car also comes with roll-over protection, a reinforced windscreen and central pillars, which add stiffness to the structure. The standard E-Class saloon gets the full five star safety rating from crash-testing body EuroNCAP as well.