Mercedes GL-Class becomes the GLS, with revised styling, a refreshed cabin and a plug-in hybrid variant on the cards 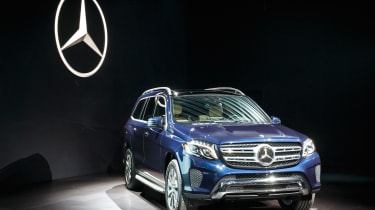 With a new Land Rover Discovery around the corner and the latest Audi Q7 in showrooms, Mercedes isn’t resting on its laurels.  The outgoing GL-Class will be replaced by the GLS at the end of the year, and the firm has released full details of the updated model.

The fresh moniker allows Merc’s largest SUV to fit in with the new naming strategy for the rest of the range. It sits above the GLE (previously ML) that was also revised in a similar vein earlier this year. Despite the new branding, however, not an awful lot has changed from the outside. There’s a revised chrome grille and air intake design, a refreshed bumper and some new light clusters. fresher alloy wheels and extra paint finishes also feature.

Inside you’ll find a bit more has changed.  To match the rest of Mercedes’ range, a ‘floating’ touchpad-style COMAND infotainment and navigation system has been introduced in the centre of the dash, replacing an older-generation integrated unit. Tweaked air vents, a new three-spoke multifunction steering wheel and new upholstery options are further highlights. A new optional ‘Exclusive’ equipment line brings more upmarket leather and trim designs, while there’s the latest suite of active safety tech, too. 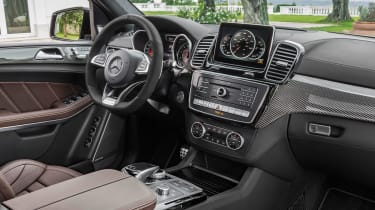 For now, there are still only two engine options in the UK GLS range. The GLS 350d  V6 diesel still gets 254bhp and 620Nm of torque, and is now hooked up to a nine-speed auto, while the hot Mercedes-AMG GLS 63 features an additional 28bhp – to bring it to 577bhp – with 760Nm of torque. Fuel economy and CO2 emission figures are yet to be released. An optional off-road package includes a centre differential lock and low range gearbox also allow it to tackle muddy terrain.

A Mercedes spokesman claimed it’s very likely that the UK will also get a GLS 500e plug-in petrol hybrid, combining a 3.0-litre V6 with an electric motor. In the smaller five-seat GLE, that powertrain is capable of 0-62mph in 5.3 seconds, yet also manages 76.4mpg on the combined cycle and emits just 84g/km of CO2. 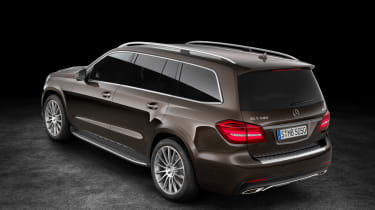 Retuned AIRMATIC air-suspension also features on the GLS, bringing Active Curve Control and the option to raise the ride height to 306mm to ford a 60cm water depth. An updated Dynamic Select drive control system allows six driving modes, with an off-road setting and an individual function to allow a combination of modes.

UK prices are yet to be revealed, but expect them to rise slightly from the current GL range, which starts at £61,600.

What do you think of Mercedes' new SUV giant? Let us know in the comments section below...