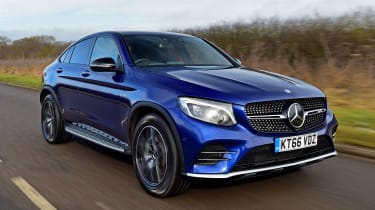 It’s fast, capable and comfortable, but we think this powertrain sits better elsewhere in Merc’s range than it does in the GLC 43 Coupe. A Porsche Macan is a more engaging all-rounder, while those dead set on a swift Mercedes SUV should gravitate towards the more practical standard car or opt for the excellent V6 diesel. Better still, hold out for the GLC 63, which could inject more thrills into the package.

Before AMG is really let loose on the Mercedes GLC range, the half-fat GLC 43 model you see here is the fastest and most expensive version of the premium SUV. It’s designed to offer a more civilised middle ground between the scorching GLC 63 due later this year, and the mainstream diesel models. We’re trying it in the more style-oriented Coupe form to see if it achieves that balance.

Style-oriented it may be, but we’ve never been convinced that the GLC Coupe’s design offers anything more over the standard, and hardly unattractive, GLC SUV. The larger wheels, quad exhausts and AMG styling trinkets of this model are subtle and elegant, but given the same effect can be had on the standard GLC 43 we’re not sure a sloping roofline adds an awful lot. It’s greatest achievement is reducing rear headroom and lopping 200 litres off the normal car’s total boot capacity. 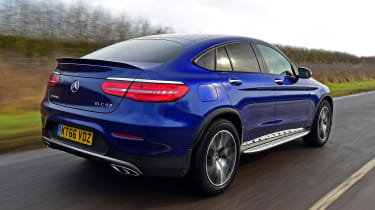 Still, we know from previous experience that the 362bhp 3.0-litre twin-turbo V6 is a capable and punchy powertrain. It’s surprisingly fast, in fact, with its 0-62mph time of 4.9 seconds shaming the Porsche Macan GTS. More than that, it’s impressively flexible, being happy to waft along and rely on its meaty torque delivery and quick-shifting nine-speed gearbox, or blast energetically to the redline with a suitably tuneful wail.

Flick it into Sport or Sport+ mode and it’ll deliver a variety of pops and crackles from the exhausts, too. In these settings the throttle response is improved, the gearbox will hold on to lower ratios, and the steering weights up – though you’ll never find it particularly communicative or engaging. 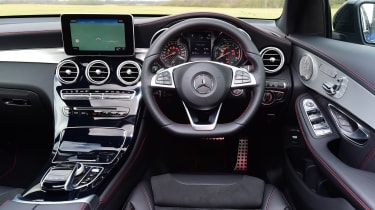 The three-chamber air suspension, which has been tuned by AMG to deliver greater handling composure, also tightens up to make a decent fist of disguising the GLC 43’s 1,890kg kerbweight. Push hard, however, and despite huge grip from the four-wheel drive system, the Mercedes tries to smother you with electronic assistance rather than letting you explore its limits. It’s certainly no Porsche when it comes to driver involvement or finesse.

At least the ride quality isn’t unduly affected by the AMG revisions. Stick the GLC back into Comfort mode and it’ll waft gracefully over all but the worst intrusions – and most of the time it doesn’t feel any firmer than a standard AMG Line equipped diesel. Wind noise is kept at bay, although the chunky wheels and tyres mean there is some road roar to be heard.

So, the GLC 43 is a commendable fast cruiser, but despite the characterful engine and mighty turn of pace, it doesn’t deliver the pure excitement that the best AMG-fettled cars offer in spades. As a result, we find it difficult to recommend over the 350d V6 diesel, which offers all the performance most would reasonably need, in a slightly cheaper and more frugal package.