Silky smooth V6 diesel fitted to Merc's GLC doesn't have too much of an economy detriment, but it's pricey 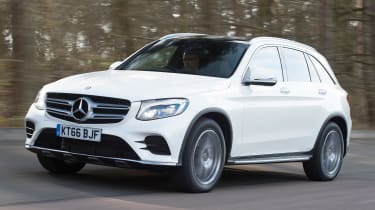 The 350d's high price tag means the 220d remains our pick of the Mercedes GLC range, but if you want to splash out on a luxurious engine, this is a great car. The diesel motor is smooth, refined and quick, without too much of an economy penalty. The GLC range's high-quality interior, smooth ride and practical body are all present on this model too.

The Mercedes GLC has impressed us since it launched, with the better-value small diesel engines providing decent economy and the powerful Mercedes-AMG GLC 43 adding huge performance to the mix as well. But does the middle ground between the two - the GLC 350d - manage to balance its abilities?

The 350d model is powered by a 3.0-litre V6 turbo diesel engine with 254bhp, but the crucial figure is a huge 620Nm of torque available at just 1,600rpm. That means in-gear performance is excellent, and a squeeze of the throttle brings a rumble from under the bonnet and a sometimes surprising turn of speed from the 1,890kg SUV.

Performance off the line is as good as you're ever likely to want from a diesel SUV like this, because four-wheel drive and all that power take the GLC 350d from 0-62mph in just 6.2 seconds. The petrol-powered AMG 43 is faster, but feels a bit more frantic than the big diesel, which has the luxurious feeling many will want from a large engine. 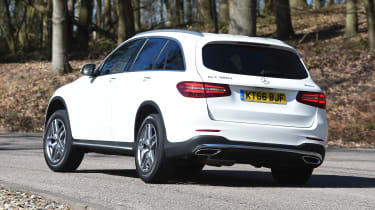 As with the other models in the range, the nine-speed automatic gearbox shifts smoothly and quickly, and in auto mode it's good at keeping the engine in the right rev range as well. The nine ratios help to keep economy figures reasonable, too, because the 350d manages a claimed 47.9mpg. That's a little way off the 220d's figure of 56.5mpg, but considering how much more luxurious the smooth V6 is next to the more vocal four-cylinder, it could be a worthwhile trade-off for some.

The 3.0-litre unit is certainly the more refined choice, although it does cost over £5,000 more than an equivalent 220d. Find a good PCP deal, though, and some will be happy with paying a bit more per month for a a much more pleasant engine.

Though the big diesel is a bit heavier, it doesn't feel too much different to drive. There's some body roll in the corners, to be expected of a big car like this, but it's reasonably composed and the trade-off for that is a smooth ride. It softens out potholes very well, and glides along faster roads with ease. The steering is on the light side but still fairly well weighted, but it's a bit numb and the GLC doesn't have the agile feel of a rival Jaguar F-Pace. 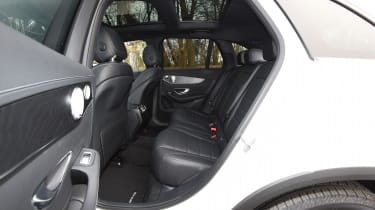 There's lots of room inside for passengers as well as luggage, although the high boot floor means it might be a pain to lift up heavy items. There's no load lip, though, so once you've done the lifting it won't be a problem to slide things in. With 550 litres on offer with the seats up, the GLC's capacity is on a par with the latest Audi Q5's - though the Merc has 50 litres more space with the seats down, at 1,600 litres.

As with all GLC models, the interior is a highlight, with high-quality materials everywhere and a very upmarket design. The seats are comfortable and look great, and the infotainment system is easy to use and packed with features, although some may feel that looks a bit awkward perched on top of the dash, like an iPad.