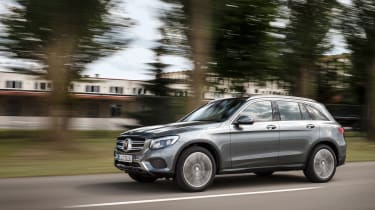 For many, the £1,155 jump from the Mercedes GLC 220d to the more powerful GLC 250d will seem worth making, but in reality the boost in power is barely noticeable on the road. The entry-level 220d is smooth and refined and, despite the detuned engine, feels more than at home on the motorway. If you can’t afford the premium, you shouldn’t feel short-changed with the capable and well-sorted 220d.

We’ve already driven the powerful GLC 250d and plug-in 350e. But how does the cheaper 220d fare in a competitive premium SUV market awash with BMW X3s and Audi Q5s?

On the road though, the deficit is barely noticeable. Yes, the 250d is more eager when you plant the throttle in third or fourth gear, but from a standstill both cars build speed in a gentle yet efficient manner. The 220d goes from 0-62mph just seven tenths slower than the 250d (8.3 seconds vs 7.6 seconds) yet costs £1,155 less spec-for-spec. 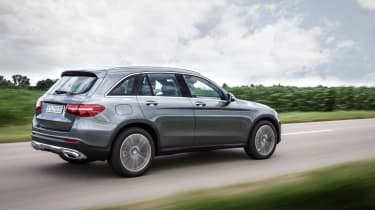 Our car had the optional air suspension – but as we mentioned in our previous reviews, all UK cars come with steel springs and adaptive dampers. As a result, the GLC rides really well, and even this entry-level 220d is remarkably refined. Unlike in the C-Class, the rattly diesel is nicely suppressed, and there’s very little to speak of in terms of wind noise or tyre roar.

The GLC is no sports car, but body roll is controlled and there’s plenty of grip. The lesser 220d gets a 45:55 front to rear torque split, while the faster 250d sends 69 per cent to the back axle. It’d take a very keen driver to distinguish any difference in normal driving, though, and the two actually feel very similar on a twisting country road.

As with the 250d, all 220d models get a nine-speed automatic gearbox, which despite being single clutch, swaps cogs smoothly. It’ll quickly drop from ninth to fifth if you ask it to, and even into fourth if you request maximum acceleration by pushing the throttle right to the floor. 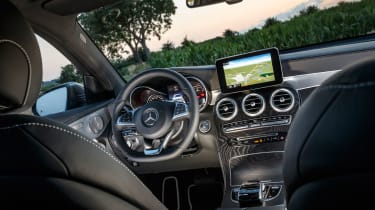