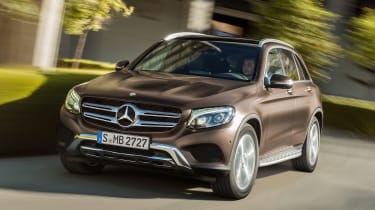 With no premium small SUV in its range, Mercedes has had to watch as rivals BMW and Audi won the hearts of UK buyers with their X3 and Q5 models. Yet, at long last, the new Mercedes GLC has arrived on the scene. Based on the C-Class, the GLC is more car-like to drive than its rivals, very refined with a well made interior and plenty of luggage space. It’s looks aren’t just for show, either, as the optional off-road package makes the GLC a talented 4x4, too. Watch out, X3 and Q5.

This is the year that Mercedes will leave no stone unturned when it comes to its new range of SUVs. In a bid to regain lost ground to main rivals BMW and Audi in the premium SUV markets, Mercedes is going all guns blazing with a raft of new 4x4s and a new naming structure to make digesting its range a little easier.

We’ve had the chance to ride in the front seat of a pre-production Mercedes GLC recently, but now we’ve been behind the wheel of the car that hits showrooms this month.

The GLC is Mercedes’ answer to the BMW X3 and Audi Q5, and replaces a car that was never offered here – the GLK. The GLK’s boxy body, however, has changed to something far more curvy and aerodynamic. 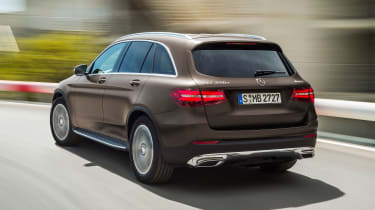 As is the trend in so many markets these days, the GLC is also larger than the car it supersedes – it’s 12mm longer and 4mm wider, but, interestingly, it’s shorter, broader and lower than the X3.

Plus, the wheelbase has been stretched by nearly 120mm, which all adds up to a more roomy interior. There’s now extra shoulder room – especially up front – plus 550 litres of boot space with the 40:20:40-split rear bench up, and 1,600 litres with the seats down. That’s almost identical to its two nearest rivals’ capacities.

Yet despite the increase in dimensions over the GLK, the GLC weighs an average of 80kg less than its predecessor due to more extensive use of ultra-high-strength steels and aluminium in its structure. Along with tweaked engines and a new nine-speed automatic gearbox, there are efficiency improvements of up to 19 per cent, too. 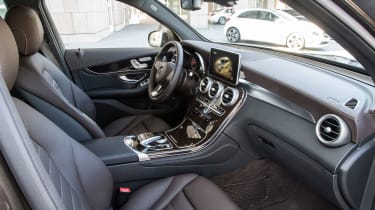 The GLC uses the same platform as the C-Class (hence the ‘C’ in its name) but in order to make it competent off-road, it has been given short overhangs that allow the approach, departure and ramp angles to be only slightly lower than those of the old GLK.

Adaptive dampers and steel springs come as standard, with Air Body Control air-suspension available as a £1,495 option. Select Sport on the standard Dynamic Select system with this extra fitted, and the GLC drops by 15mm, while the dampers stiffen for more focused driving. And to make it easier to load items into the boot, the tailgate lip can lower by 40mm, too.

We already know the GLC is a competent off-roader from the passenger seat, but behind the wheel, what’s immediately noticeable is how incredibly car-like it is to drive. That’s no bad thing being derived from the C-Class family, with limousine-esque comfort, good cabin soundproofing and, thanks to the different driving modes, the ability to rein in excessive body lean. 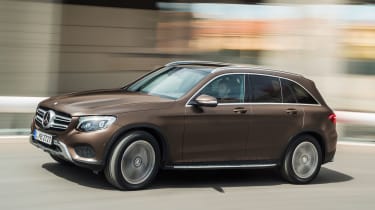 The engine responds with strong stamina just above 1,500rpm, where all 500Nm of torque is deployed and the new nine-speed auto makes best use of the performance and economy available from the four-cylinder 201bhp 2.1-litre diesel engine.

It’s refined on the move, and Sport mode allows the GLC to take corners with very little body roll. All GLCs have permanent four-wheel drive, but the newcomer gets a more rear-biased set-up over its predecessor, with 67 per cent of torque sent to the back wheels.