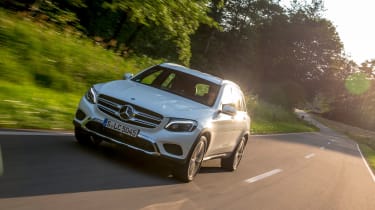 It’s a shame this GLC 350e won’t be offered from the outset, as the promise of 109mpg fuel economy and London Congestion Charge exemption would be a big pull for company car drivers. It’s fast, refined and decent enough to drive – while also shaming rivals in terms of CO2 and fuel economy.

When the Mercedes GLC arrives in the UK later this year, we’ll be graced with a diesel-only engine line-up – initially comprising two four-cylinder oil burners with either 168bhp or 201bhp. We’ve already driven the higher-powered diesel but, if you want a petrol – or indeed a hybrid – you’ll need to wait a little longer. While parts of Europe, China and the US will get a 2.0-litre petrol GLC 250, such an engine isn’t even earmarked for the UK. Bosses have confirmed this GLE 350e plug-in hybrid will join the range though, albeit not for at least 18 months.

Mercedes quotes 109mpg, and just 60g/km of CO2 – though if you have means of regular charging and your commute is less than 21 miles, you could effectively never fill the 350e with unleaded fuel. It’ll be a big hit for company car drivers too, fitting into the lowly nine per cent BiK tax bracket. The diesels come in at 23 per cent. 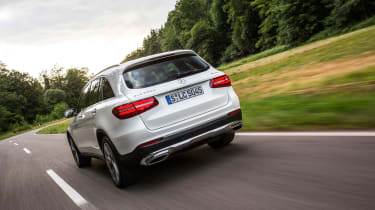 On the road, the instant torque is immediately noticeable when pulling from a standstill. Bury the throttle and the petrol engine bursts into life – offering impressive straight-line speed. In fact, until a Mercedes-AMG GLC 63 arrives at a later date, this hybrid is the fastest model in the range, sprinting from 0-62mph in just 5.9 seconds and topping out at 146mph. In Hybrid mode, the 2.0-litre, four-cylinder petrol engine and electric motor work together for optimum performance, decoupling when you lift off the accelerator to generate energy for the batteries – and linking again to provide a burst of acceleration when overtaking slower moving traffic. In our experience, this gives the best all-round driving experience, and allows the combustion engine to work its magic seamlessly and effectively. What’s more, providing you don’t push past the accelerator’s EV threshold, you can run up to 87mph in electric power alone. The motor is actually linked to the gearbox, and switches gears even in electric mode – ensuring the car is always ready in case you need a boost from the combustion engine. In pure E-Mode, however, the GLC will pootle along in complete silence, aside of course from some slight wind whistle and tyre roar at motorway speeds. 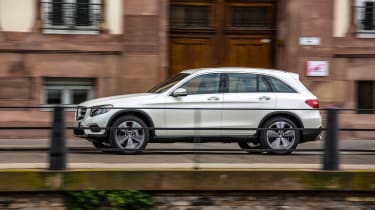 But the cabin is actually remarkably refined – both in the 350e and the two diesels we’ll get from launch. Engine noise is remarkably hushed, and the dashboard pinched from the C-Class is not only beautifully designed but also very well made. Like other existing plug-in models, the 350e also allows you to save and generate charge for electric-only driving later in your journey. If you specify the optional sat-nav (part of the £1,295 Executive Package) the car can analyse the projected route and use GPS radars to ensure an ‘optimal operating strategy’. In other words, intelligently saving energy for pollution-free urban driving. This works alongside the innovative haptic pedal, which can pulse to encourage the driver to lift off and save fuel.

Those particularly concerned with what power is going where, can use the graphic on the central screen to determine when the electric motor is charging, and when the petrol engine is ignited to help turn the wheels. As with other hybrids, there are various charts to show where and when energy is being used. 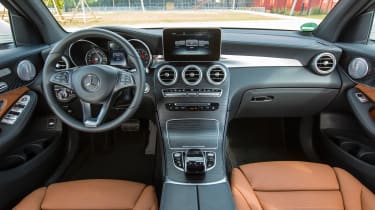 On smooth, unbroken French autoroutes, the GLC 350e was unbeatably comfortable. Our car rode on the optional air suspension, which no doubt helped the cause, but all UK cars with get adaptive dampers as standard when the GLC range arrives later in the year. So the GLC 350e is cheaper to run, yet just as easy to live with, as either of the diesels? Not quite. Practicality does take a dent, and there’s no underfloor storage to speak of. Head and legroom in the back is unaffected, but bootspace is down from 550 litres to 395 litres with a nasty step above the bumper. It’s not a deal breaker, but if space is a concern, the standard car is unarguably more versatile.