A raft of improvements mean the sporty SLK is ready to challenge for class honours. 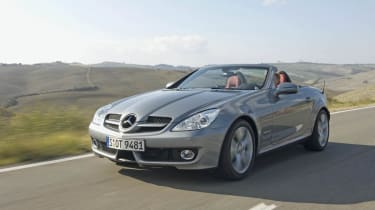 The sharper look of the SLK is only one part of the mix that makes it a more credible contender in the roadster race. While prices have increased by around £1,000 across the range, it’s money well spent. Drivers not only get a higher quality cabin and a host of clever extras, but a revised engine range that offers increased performance, improved fuel economy and reduced carbon emissions

TOP marks to Mercedes. The current SLK may seem hard to beat, but the firm has lifted the lid on the revised version. And it has a few more tricks up its sleeve than looks alone.

The SLK’s price tag has risen by £1,000, but with a punchier engine line-up and much improved economy, cabrio fans should find the latest model hard to resist.

Its Formula One-inspired facelift helps to give it a more edgy appeal, as the newcomer aims to meet the challenge of key rivals, including the BMW Z4, Porsche Boxster and Audi TT Roadster head on.

But how does the two-seater perform on the road? To find out, we tried the entry-level 200 K version.

With prices starting at £29,705, there’s no cheaper way of owning an SLK. The four-cylinder version misses out on the lightweight alloys of more powerful models, but you still get the reworked rear end, with updated tail-lights and new exhaust tips.

The wing mirrors are larger, too, and now come with LED indicator repeaters. New colours, including special silver and green tints, are also available. Inside, the cockpit is snug and well constructed. The centre console remains cluttered, but there are smart dials with brushed aluminium highlights and red needles. The three-spoke steering wheel includes multifunction controls as standard.

When the roof is in place, the cabin is light and airy, and visibility is excellent. With the top down, an optional transparent windshield can be fitted between the headrests to boost rearward vision.

Dropping the three-piece metal top takes a somewhat lengthy 22 seconds, although the operation can be performed while the car is travelling at speeds up to 5mph. Once down, occupants are well insulated from buffeting.

However, Mercedes still hasn’t solved the problem of what to do with the stowed top. The folded panels are stored in the boot, which reduces space from a useful 300 litres to a less practical 208 litres.

As with its predecessor, the options list on the SLK is vast. Voice-activated commands are now possible via the firm’s Linguatronic system, and you can also opt for a Harman/Kardon surround-sound stereo. To keep your neck and shoulders warm, there’s Mercedes’ Airscarf system, which blows warm air from the head restraints. And manoeuvring the car is made easier with the help of a new direct steering feature, which was fitted to the model we drove.

An evolution of the firm’s speed-assist system, and likely to set you back an extra £220, this impressive gadget not only takes into account the car’s speed, but also the steering angle. In town, it makes parking and quick U-turns astonishingly easy. But on the motorway, the wheel weights up, which makes for more relaxed long-distance driving.

With such a potent engine line-up on offer, including the vocal new 3.5-litre V6, our entry-level 200 may not appear to be the best choice at first glance. But the supercharged unit is not short on thrills, and drivers certainly won’t be disappointed by its improved performance. Power has risen from 161bhp to 181bhp, and after a slightly sluggish start in the low gears, the unit perks up at around 3,000rpm.

The six-speed manual gearbox isn’t as slick as we’d have liked, but for an extra £1,480, buyers can opt for the firm’s five-speed automatic. As well as more power, economy has been boosted by 4.2mpg to an impressive 36.7mpg on the combined cycle, while CO2 output has dropped from 209g/km to 182g/km. But the real changes to the Merc are not in the detail, but its overall appeal. The newcomer’s carefully judged upgrades don’t simply keep the SLK up to date, but ensure that the three-pointed star has lost none of its shine.