New Mercedes SLK roadster gets an eco engine, but it still packs an almighty punch 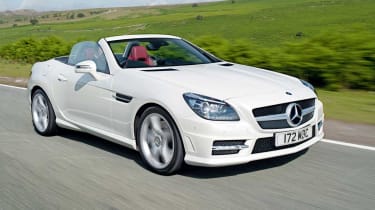 Putting a diesel engine into the SLK makes great sense: it’s got power aplenty and it’s super-efficient. It may lack a little refinement and is not as sharp to drive as Porsche’s Boxster, but as a handsome, swift, comfortable and economical all-rounder that’s still good fun, it’s certainly worth a look.

Advertisement - Article continues below
The world is slowly coming around to the fact that diesel sports cars are a good thing (if they’re good enough for Le Mans winners...), but diesel roadsters?
After our first drive in the new Mercedes SLK 250 CDI, you’d be bonkers not to consider it. Under the chunkier-looking new SLK’s bonnet is a 2.1-litre four-cylinder diesel with 200bhp, but a much more exciting 500Nm of torque.
That translates to a 0-62mph time of 6.7 seconds, a tenth of a second shy of the petrol SLK 250. But where the petrol car claims an average of 42.8mpg, the diesel should do 56.5mpg – that equates to a tax-friendly 132g/km of CO2 (versus 153g/km). Oh, and it’s a couple of grand cheaper.
Refinement is a mixed bag – the engine is a bit noisy when you push it, but not too bad when driven gently. Power is delivered smoothly, though, and there’s lots of it. You won’t get the instant throttle response of the petrol models, but you do get a massive and long-lasting shove of power that will keep you pinned into your (rather comfy) seat.
Advertisement - Article continues below
Advertisement
Advertisement - Article continues below

The latest SLK has made things much more exciting for the driver, with decent body control and bags of grip. But it still isn’t as involving as a Porsche Boxster or a BMW Z4 – that’s mostly down to steering that feels a bit slack around the straight ahead and places weight above feel.
Our test car also put a premium on comfort, no bad thing on UK roads and for everyday use. The ride soaked up holes and bumps, while the seven-speed auto slurs the changes nicely (a six-speed manual will be available soon).
While some roadsters eschew the folding metal roof, Mercedes has stuck with the formula that made the SLK famous – but with a twist. Our car had a panoramic roof which changes from opaque to transparent at the flick of a switch – a great £410 option.
The roof restricts boot space when it’s folded away, but you can enjoy buffet-free driving with added comfort thanks to the £395 air scarf to warm your neck and £330 heated seats.
Even cup holders are optional (£50), but at least Bluetooth and a DAB radio are standard in the beautifully built, if not especially stylish, cabin.
Advertisement
Share this on TwitterShare this on FacebookEmail
Advertisement