Does the new 5.5-litre V8 turbo make the range-topping Mercedes SLK the most thrilling drop-top of the summer? 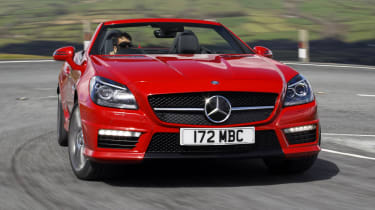 It may be powered by the world’s most efficient V8, but the SLK55 AMG is anything but soft. While it’s comfortable, well equipped and civilised, thanks to that hard-top, this is still a hotrod at heart. The naturally aspirated 5.5-litre engine is brilliant. It’s not the best handling roadster out there, but the SLK55 AMG is an excellent all-rounder.

Advertisement - Article continues below
Mercedes tuning arm AMG is renowned for shoehorning large engines into small cars, and it’s worked its magic again with the SLK55 AMG, which we’ve driven on UK roads for the first time.
A short rump and long nose give the newcomer the look of a classic roadster, and it’s a compact design, although the AMG bodykit and standard 18-inch alloy wheels lend it some more aggression.
In our eyes, this is the best-looking SLK yet, but we still wouldn’t describe it as beefy – at least until you fire the engine.
Under the louvred bonnet is the same 5.5-litre V8 as found in new 63 AMG models, albeit without the twin-turbochargers on the E, SL, and S-Class, as well as the G63 driven on Page 44. Still, this naturally aspirated engine makes 416bhp and 540Nm of torque – enough to take the SLK from 0-62mph in only 4.6 seconds and on to an electronically limited 155mph.
Advertisement - Article continues below
Advertisement
Advertisement - Article continues below

It does so with a typical AMG soundtrack: the V8 erupts from the quad exhaust pipes and emits a carefully choreographed crescendo of pops and bangs on the overrun. It’ll do the same each time the dual-clutch gearbox changes up.
The rest of the package isn’t quite as exciting, though. While the steering provides consistent weighting, it doesn’t have the same level of feedback as the new Porsche Boxster.
Leave the quick-operating folding hard-top in place and refinement is excellent, but stow it in the boot and you can feel the extra weight over the rear axle. Still, body roll is acceptable and there’s plenty of grip in the dry.
The key to the SLK55 AMG’s appeal is its ability to be civilised and efficient one minute and a hooligan the next. Not only is it comfortable, with a high-quality interior and plenty of standard kit, it can also return 33.6mpg. That’s mainly due to the cylinder management system which can deactivate four of the V8’s cylinders below 3,600rpm. And this happens so quickly that most drivers wouldn’t notice if it wasn’t for the dashboard indicator.
It’s not cheap, but with such a breadth of abilities this AMG model is the best SLK on sale.
Advertisement
Share this on TwitterShare this on FacebookEmail
Advertisement