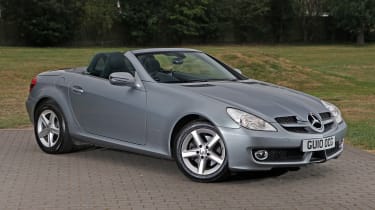 Although the Mercedes SLK wasn’t the first coupe-cabriolet (Peugeot got there first, six decades earlier), it was the first with global premium appeal. The original SLK (codenamed R170) arrived in 1996, then in 2004 an all-new second-generation model went on sale, codenamed the R171.

While the Mk1 was a very good car, the second edition was a big improvement, with a much better driving experience, stronger levels of build quality and a much smarter design inside and out.

Add in some excellent engines that range from mild to wild, along with some very slick gearboxes, and it’s easy to see why the SLK is so popular, even if it’s more of a cruiser than a pin-sharp driving machine. 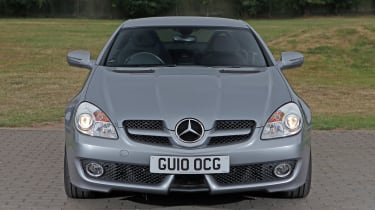 When the second-generation SLK was launched in July 2003 there was a choice of 163bhp 1.8 or 272bhp 3.5-litre V6 petrol engines (SLK 200K or SLK 350), as well as a high-performance variant, the SLK 55 AMG, with a 360bhp 5.5-litre V8. The AMG only came with a seven-speed auto box, while the other two got six-speed manual boxes as standard, with the option of an auto. All versions are rear-wheel drive.

There is no diesel SLK Mk2, so it’s a choice of four, six or eight-cylinder petrol engines. The SLK 350 is super-smooth, but the four-cylinder SLK 200K is also quick, refined and smooth enough. It also costs less to run than the SLK 350. However, it’s worth buying a facelifted car (from April 2008), because the extra 21bhp makes more of a difference than you might think. 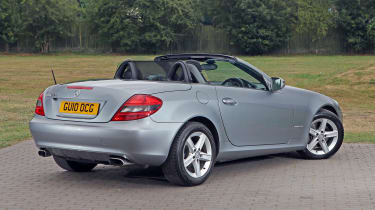 Most SLKs have the optional auto gearbox, which suits the car’s nature very well; the main reason not to buy a manual is that it might be hard to sell on later. Mercedes offered a lot of options, including sports suspension which significantly firms things up – but you might find it uncomfortable.

Alternatives to the Mercedes SLK Mk2

The Audi TT is more usable in the winter because it has either front or four-wheel drive, but the cabrio is a soft-top, so you have to pick either a Roadster or a coupe.

Like the TT, the BMW Z4 is well built and the first generation came in cabrio or coupe forms; the Mk2 (from 2009) was a coupe-cabriolet. With rear-wheel drive, it’s more of a driver’s car than the Audi, and it sounds nicer, too, especially in six-cylinder form.

The Porsche Boxster is the best of the lot to drive, though, and is beautifully built, as well as being surprisingly practical, while the Honda S2000 provides plenty of thrills and excellent reliability for not much cash. 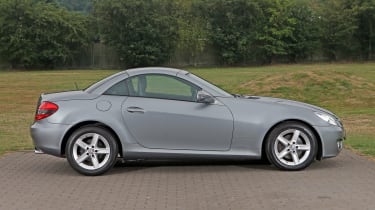 The SLK’s electrical system is reliable, but if the wipers don’t  work, check the bonnet is closed properly; there’s a safety switch that cuts in and disables them.

Folding hard-top is reliable if raised and lowered regularly. If it’s left in one position for too long, though, the motors seize up, so check it all works. Repairs can be costly.

SLK doesn’t generally appeal to enthusiast drivers, but some owners get carried away with style over substance and fit 19-inch wheels, which destroy the car’s ride.

The SLK isn’t a big car, but it can still be tricky to park because it’s hard to see where the corners are, especially when reversing. It’s worth buying a model with parking sensors. 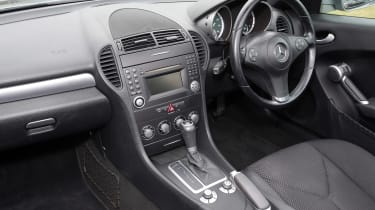 The SLK’s cabin quality is good, but facelifted cars are noticeably better than their predecessors. An option worth having is the Airscarf, which blows warm air on to your neck; it’s brilliant for top-down winter driving. Practicality is pretty decent; the boot has 300 litres, or 208 litres with the roof down.

Facelifted SLKs need maintenance annually or every 15,500 miles; earlier cars have variable servicing which allows up to two years between garage visits. Services alternate between minor and major, priced at £235-£272 and £400-£450 respectively, depending on engine fitted.

Motors are chain-driven, so cambelts aren’t needed. Fit fresh spark plugs every 48,000 miles or four years, at £100-£200 depending on the model (some engines are twin-spark). The long-life coolant needs to be checked at each service and replaced or topped up as necessary. Brake fluid should be replaced every two years (at £90), while an annual air-con check is needed; a regas is £100. 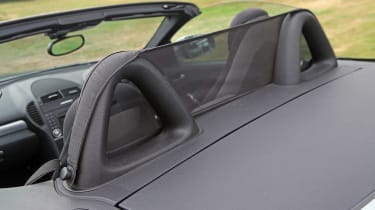 The second-generation SLK has been recalled only once, and now that the car has been out of production for five years, hopefully it won’t be again. That campaign came in November 2008 and affected 72 cars, also including the M-Class, CLK, E-Class, C-Class, A-Class and R-Class.

The problem related to SLKs built up to October 2008, which could suffer from the fuel supply not shutting off in an impact. A control unit was at fault; the fix replaces the unit, which was installed with updated software.

The SLK isn’t mainstream enough to feature in our Driver Power surveys, but owners on our sister site carbuyer.co.uk give an average score of 4.2, making it a hit. They say running costs are high.