There's more to the SLK than its clever roof - it's fast, well designed and is a relaxed cruiser. However, it doesn't relish hard driving. 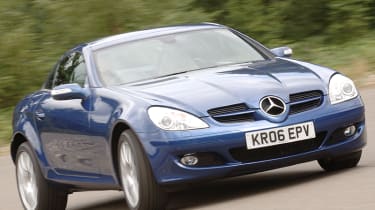 Driving Driven in isolation, the SLK is rewarding, but it's not a genuine sports car. The brakes aren't that impressive, for example. They take too long to come to a halt from 60mph, the ABS activates too quickly and the pedal lacks feel. The same applies to the over-assisted steering, while the suspension isn't as well controlled as it should be, with a tendency to pitch and dive when pushed. This makes it feel comparatively loose and sloppy, a sensation not helped by the over-active traction control. Instead, it's happiest when cruising. Although it bucks a bit on bumpy B-roads, it's generally supple and relaxing. Combine this with the sense of security and isolation generated by the hard-top, and the Mercedes emerges as an ideal car for long trips. Particularly with a combination of light kerb weight and a strong 3.5-litre V6 engine option. This summons Porsche-beating acceleration, though it doesn't sound particularly great. Also available is a surprisingly able 2.0-litre supercharged four-cylinder, though this sounds even less appealing than the V6.

Marketplace The Mercedes has a traditional roadster shape, with a long nose and a short tail. But although detailing is lacking close-up, the F1-inspired pointed front, sculpted flanks and short tail give it an athletic appearance. And until you see it in action, it's hard to believe the metal roof actually fits under the bootlid - that's one reason why this work of engineering art is something that owners will never tire of watching. No compact sports rival can match it; the Audi TT, BMW Z4, Porsche Boxster and Alfa Spider all offer fabric roofs.

Owning The way the metal roof moves is pure poetry in motion. And even with the top down there's 208 litres of space in the boot, and with it up the bigger glass area it offers over canvass-roofed rivals - it has a larger back screen and taller side windows - not only boosts visibility, but means the cabin is bright and airy. Unfortunately, the extra light focuses attention on the Merc's cabin materials. The shiny, hard plastics and cheap looking trim aren't very appealing. That's a shame, since the Mercedes is otherwise very elegantly laid out. However, from the springy pedals to the wobbly column stalks and light steering, none of the controls operate with sports car precision. There's one feature we do love though - Airscarf. The three-speed set-up pumps heat from vents in the headrest, keeping you warm when the roof is down. It's not cheap though, rather like the SLK. And while retained values are excellent, servicing is expensive and Mercedes dealers don't enjoy the best reputation.