Does coupe-cabrio impress with a V6? 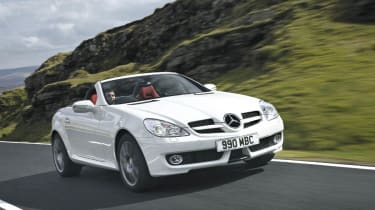 It's not as focused as the likes of BMW’s Z4, but the SLK is rewarding to drive and good to look at – and has far more to offer than the costly SL. The V6 is responsive and smooth, and while the six-speed gearbox isn’t perfect, there are few more capable grand tourers in this class.

There is no doubting the appeal of Mercedes’ big SL. Having benefited from a facelift, it’s now more desirable than ever.

We were particularly impressed by the entry-level V6 SL350 when we drove it in Issue 1,022. So, what about the lesser SLK 350? With the same engine but a much lower price and more compact shape, does it serve up as many thrills?

The short answer is yes. The dramatic new design gives the car considerable road presence, while the 3.5-litre petrol unit under the bonnet provides performance that’s nearly as potent as its big brother’s.

Its metal folding roof is every bit as easy to use as the system on the SL, and while the interior isn’t quite as spacious, it’s just as well built. Practicality is a strong suit, too – even with the roof down, the SLK offers 208 litres of boot space.

However, the package is let down by the manual gearbox on our car, as it suffers from a notchy, awkward change.

Then there is the exhaust note – it’s just not as meaty as the SL’s, or for that matter rivals such as the Audi TT and Nissan 350Z. Where the latest SLK does score is on long, winding roads. The accurate yet undemanding chassis and comfortable cabin combine to make it a great tourer.

Add in the sense of security and isolation generated by the hard-top, and the Mercedes is still one of the best high-speed cruisers in this class.

While its £36,885 asking price seems steep, we can’t help but admire the way in which the roof folds away. It must have cost millions to develop, and the mechanism is no less dramatic to watch than that on the SL – which is nearly twice as much to buy. For that reason alone, Mercedes fans on a budget should give the SLK 350 serious consideration.