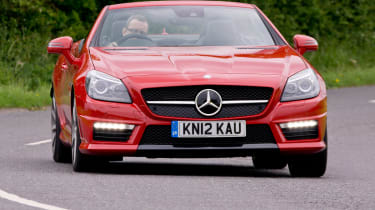 It’s fair to say that in the eyes of keen drivers, the Mercedes SLK has always lived in the shadow of the Porsche Boxster. But bring the brand’s famous AMG tuning division into the equation, and things aren’t as clear cut.

It’s just a shame the uninspiring styling doesn’t do the same. Parked next to the Porsche, the SLK looks bulky – partly because accommodating the two-section metal roof gives it a heavy rear end.

The top takes a lengthy 20 seconds to fold, and doing so reduces boot volume by 110 litres, to 225 litres. Plus, refinement with the roof in place is no better than in the fabric-hooded Audi and Porsche.

The cabin offers decent space, and there’s plenty of adjustment on the seat and steering wheel. The deep-set dials and turbine-style air vents are nice touches, while navigation, Bluetooth, DAB radio and heated seats are standard.

Our car also featured the £395 Airscarf system, which blows warm air around your neck. It had a pair of optional pivoting transparent air deflectors, too, but we still found the cabin blustery.

The ride isn’t as composed as the Porsche’s, either, and with some creaking around the screen the body doesn’t feel as rigid – although at low speeds the suspension isn’t as bone-jarringly stiff as the TT’s.

Still, on flowing roads the SLK feels heavy compared to the Boxster and the steering lacks the Porsche’s razor-sharp precision.

There’s more weight transfer as you turn into a bend and on the exit of corners the stability control works hard to maintain traction. Overall, the Merc isn’t as engaging as the Porsche and doesn’t offer the surefooted traction and body control of the Audi.

It has one trump card, though: the 5.5-litre engine. It’s claimed to be the world’s most fuel-efficient V8 and uses Formula One-inspired technology to shut off four of the cylinders at low speeds. The end result is CO2 emissions of just 195g/km, plus during our test we averaged an impressive 30.3mpg.

But AMG’s focus on efficiency hasn’t diluted the car’s performance. With 540Nm of torque, there’s a wave of effortless mid-range acceleration, and the seven-speed DCT transmission changes gears smoothly and quickly. You get a firecracker exhaust note and a lovely throttle blip on downshifts, too.

So while it’s difficult to ignore the Porsche’s greater driver engagement, the SLK’s blend of performance and efficiency stands it in good stead.

Chart position: 2Why? The SLK 55 is pricey, but you get a folding hard-top, plus clever V8 combines highest power output with strong efficiency.