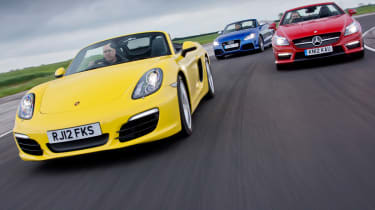 The new Boxster has hit the UK just in time for summer, and unlike the British weather it promises to be hotter than ever.

Porsche claims it’s the biggest leap forward in the roadster’s illustrious history. It’s longer, wider and lower than the car it replaces, and its flat-six engine is more powerful yet cleaner and more efficient than before. We test the 3.4-litre Boxster S, with the standard six-speed manual box, against two talented rivals.

First up is the mighty Mercedes SLK 55 AMG. With its thundering V8 engine, uprated chassis and neat folding hard-top, the range-topping roadster is one of the most desirable two-seaters on the road. Equally exciting is the Audi TT RS, which combines a muscular five-cylinder turbo engine with the brand’s trademark four-wheel-drive transmission.

Each of these cars takes a different approach to delivering high-performance, open-air motoring pleasure, but on paper they’re closely matched, so this is sure to be a fierce contest. We headed to the open roads of Lincolnshire to find our winner.

It looks fantastic and is quite simply one of the finest-handling cars money can buy. It’s beautifully engineered, the cabin is first rate, while the roof is well insulated and folds fast.

More surprising is the fact that three roadsters, with completely different engine, drivetrain and chassis concepts, can have such closely matched performance – and that makes it difficult to pick a runner-up.

The Audi and Mercedes have great engines, and combine punchy acceleration with great soundtracks. But the TT RS just comes up short. Without the optional magnetic dampers, the ride is too firm, while the inert handling holds it back in terms of fun. The SLK 55 isn’t as engaging as the Porsche, either, but it’s more comfortable than the TT, and its mighty AMG engine is impressively clean and fuel efficient.

Ultimately, though, neither rival comes close to troubling a car that continues to set standards in the roadster market. The Boxster is simply brilliant.

The Porsche Boxster is our Roadster of the Year – and it’s not hard to see why. The S model offers all the performance you could need and is a joy to drive, plus is practical, comfortable and refined. It’s a talented all-rounder. The fact it’s the cheapest car in this test is the icing on the cake.

Some people demand a metal roof and the SLK meets that need. The styling is a bit uninspiring, but the new 5.5-litre AMG engine is surprisingly efficient, while losing none of the thunderous character and performance buyers expect. The Mercedes is expensive in this company, though.

We’re big fans of lesser versions of the TT Roadster, but while the five-cylinder engine in the RS sounds great and the quattro all wheel drive delivers surefooted grip, this expensive car is no junior R8 and doesn’t have the dynamic magic to rival the Boxster S.