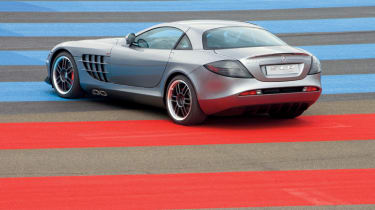 There’s no denying the 722’s quickness but the steering, though accurate, is dull and unresponsive. Despite the brakes’ superb stopping power, they are wooden and tricky to modulate, and the chassis is inert and one-dimensional. All that goes to show there’s more to a supercar than earth-shattering speed.

Incredible though it might seem, there are apparently some people who think that the 626bhp Mercedes McLaren SLR isn’t quite quick – or exclusive – enough.

If you happen to be one of them, the good news is that the even more powerful 722 Edition has finally ar-rived. The bad news, however, is that it costs an extra £32,500.

Limited to a run of only 150 models, the 722 is named after the Mercedes 300 SLR that British racing legend Stirling Moss and co-driver Dennis Jenkinson drove to victory in the 1955 Mille Miglia race from Brescia to Rome and back in Italy.

The number actually refers to the time – 7.22am – that they started the gruelling 1,000-mile challenge, which they completed at a record-breaking average speed of 100mph.

With more power and less weight than the standard version, the SLR 722 has been sent to the gym and put on a carbon fibre diet to give a more aggressive, track-biased driving experience. In addition, the steering has been sharpened, the suspension firmed up and the aerodynamics honed even further to increase its stability at high speed.

Reprogramming the hand-built 5.5-litre supercharged V8 engine’s electronic black box has pushed output to 650bhp at 6,500rpm, and torque to 800Nm at 4,000rpm – that’s 24bhp and 40Nm more than a standard SLR. From a standstill, the 722 will hammer its way to 60mph in 3.6 seconds and hit a top speed of 210mph. The five-speed paddleshift automatic transmission and its gearing remain unchanged.

It also has a new carbon fibre front air splitter and rear air diffuser to suck it closer to the road at speed, as well as a more aggressive airbrake for enhanced stability when slowing from high speed. In total, more than 300 components have been either enhanced or replaced, resulting in a 44kg drop in weight to 1,724kg. The interior features unique red stitching on the Alcantara bucket seats, along with a suede-covered steering wheel, red rings on the instruments, and redesigned aluminium shift paddles. There’s also a plasticky 722 plaque on the centre console that looks straight out of an aftermarket catalogue.

This Mercedes is all about speed, and as you would expect, the SLR is ferociously fast. With all that torque on tap, it simply catapults past slower traffic with ease, with the big V8 powerplant trumpeting its NASCAR soundtrack through its side-mounted exhausts.

Full throttle verges on the downright vicious as the engine just keeps ripping through to its 7,000rpm red line, quickly dropping into a higher gear to home in on its top speed. However, look past the devastat-ing straight-line pace, and there are some gaping holes in the special edition’s appeal. At all speeds, the steering wheel feels disappointingly lifeless, robbing the driver of crucial feedback from the road.

And although the brakes deliver incredible performance, the floor-mounted pedal is all but impossible to modulate, making smooth progress around town very difficult. What’s more, the low-speed ride quality is hard enough to loosen your fillings.