There's a heat haze blurring the view of the Barcelona test track, but otherwise the circuit ahead is clear, so we risk squeezing the throttle a little further. Up goes the SLR through the first four gears; 100mph, 120, 140 - the 155mph suggested limit comes up in a rush in fourth gear, and we've still got another ratio to use. 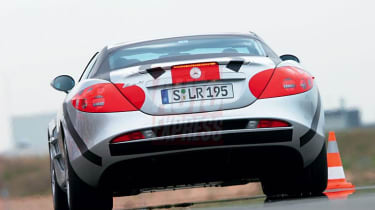 The SLR effortlessly combines luxury with performance. Never has speed been so stress-free yet so enthralling. The SLR is the ultimate GT, which lets you have a session around a track just as happily as whisking you to the golf club. If only we had the roads to justify all that power.

There's a heat haze blurring the view of the Barcelona test track, but otherwise the circuit ahead is clear, so we risk squeezing the throttle a little further. Up goes the SLR through the first four gears; 100mph, 120, 140 - the 155mph suggested limit comes up in a rush in fourth gear, and we've still got another ratio to use.

A red rev-limiter warning light flashes at 7,000rpm, but there is no upshift from the automatic gearbox until the driver says so. Change up and the acceleration is relentless until we run out of nerve - and track space - as we clock 307kph. That's 190mph, and the SLR still had plenty left. Someone braver managed an indicated 212mph today.

Until the car's official launch in September, Mercedes' engineers will only say the maximum speed is 'comfortably over 200mph', although a few technical calculations suggest it will be 217mph. There's still some fine-tuning to be done by McLaren on the prototype car we have been invited to drive. What is clear, though, is that the supercharged V8 will broach 600bhp and have 800Nm of torque on hand. Whatever the exact numbers, extreme performance such as this has never been more accessible, and the car's rumoured 3.8-second 0-60mph time is yours with just a flex of the ankle.

The SLR has another party trick - an air brake. Just as with the original 1955 Mille Miglia-winning SLR, a rear spoiler pops up to help wipe off velocity. It's not that the carbon-ceramic composite discs need much help, but it transfers downforce to the rear, helping the back brakes contribute to the stopping effort. It does mean the pedal pressures feel a little artificial, but there are still adjustments to make, says the McLaren engineer responsible.

Flip-up panels are a bit of a theme on the SLR, as you discover from sitting in the car. With the ignition on, flick up the cover on the gear selector and press the glowing start button. It's like being a fighter pilot launching a missile. As the grumbling monster V8 awakens, it seems as dangerous, too.

With the side-exit exhausts growling at lower speeds, the SLR flicks through bends accurately with negligible roll. Apply power, feel the tail twitch and know that all Mercedes' safety systems are there to sort out any problems.

With the power building, the SLR understeers gently, so we turn harder and brake in an attempt to upset the balance. But it turns tighter and slows - nothing, it seems, will faze this car. The steering is quick and sharp but sure-footed, and the SLR can ride over potholes, too - after all, the machine is being developed on the UK's roads.

The auto transmission might seem at odds with the performance, but this is a very fast GT, not a supercar racer. Let the Maybach-sourced five-speed box do all the work and it's terrific, but the snags come with the manual override. The finger buttons are awkward to use and you can't perform a throttle blip when changing down.

Another disappointment is the interior. The one-piece seats fit smaller drivers perfectly, but taller motorists will crave more space. It doesn't help that, despite the vast bonnet, the engine intrudes into the cabin space in order to give the best weight distribution.

Mercedes/McLaren plans to make 500 SLRs a year, if demand is high. With a price tag of around £250,000, the car is a relative bargain considering the technology involved. First deliveries are due in January; among the many already ordered are five for one customer, who wants a car for each of his worldwide homes. He must have a serious addiction to speed.