Welcome to the most exclusive driv­er’s seat in the world! 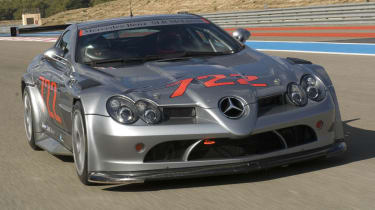 Don’t think of the 722 GT as a practical supercar – it’s more the means by which you can join a super-exclusive club of track day enthusiasts. On the race circuit, however, this special SLR is every bit as good as you would expect from a machine with such an enormous price tag. It delivers incredible performance, as well as breathtaking levels of grip and stability. The highlight of the package is the five-speed manual gearbox – which not only makes the McLaren feel more driveable, but more controllable, too.

Sitting behind the wheel of the mighty Mercedes SLR McLaren 722 GT is a pleasure only 21 wealthy buyers will get the chancce to enjoy.

This special evolution of one of the planet’s most exciting sports cars has been developed to offer all the thrills of the most glamorous race champion­ships without the full commitment of tak­ing part in one. As well as the two-seater, the price buys you entry to the SLR Club, and an invitation to contest the SLR Club Trophy on a series of race tracks – nearly all of which are on the F1 calendar. Is it any surprise so many people want to join? We caught up with the model at the Paul Ricard circuit in France to find out.

At the heart of the 722 GT is a series of modifications which turn it from a formidable road car into a race-ready track machine. Much of the engineering has been carried out by UK firm Ray Mallock Limited (RML), which has seen success in endurance racing and the British Tour­ing Car Championship. RML has also built roadgoing specials – most rec­ently a mid-engined Nissan Micra complete with a 3.5-litre V6.Based on a normal SLR, the 722 GT gets extra pace courtesy of a 670bhp version of the AMG-developed 5.5-litre supercharged V8. There’s revised suspension, plus new wheels with slick tyres. Enormous brakes help slow the car from its 195mph top speed. And a special aerodynamic package has been developed, comprising a massive rear wing and ground-hugging nose cone, complete with extra cooling vents.

Big changes have been made inside, too, with a pair of lightweight bucket seats and matching six-point racing harnesses to help keep the driver and passenger pinned tightly in place.

The dash is replaced by a simple carbon panel that houses the heater controls, while an LED dis­play provides speed and rpm readouts, as well as general information like fuel load and engine temperature. A single starter button spins the V8 into life, while the enormous side-exit exhausts make a sound like cannon fire.

On the track, the SLR quickly proves to be truly sensational. It weighs 300kg less than the standard McLaren – at 1,390kg – and with an incredible 830Nm of torque, the 722 GT accelerates with awe-inspiring urgency.

The 0-62mph sprint takes 3.3 seconds, and the car is instantly through the first three ratios of the gearbox and approaching the end of the start/finish straight at Paul Ricard before the brakes are pressed. It slows exceptionally quickly, shedding speed with such ferocity that you’re pushed hard into the seatbelt harnesses.

Even more incredible is the SLR’s mid-corner stability. Figures released by the engineers show it pulls nearly 2g through faster bends – courtesy of the impressive aerodynamics and slick tyres. From the passenger seat, the experience was the closest thing to being in a top-flight racer, without lining up on the F1 or GT grid.

Of course, that begs the question why you’d spend so much money on the car. The answer is simple: this SLR is aimed at super-rich customers who don’t have time to do a full season’s racing. It’s competition lite – you get the car, the circuit time and the technical support, but aren’t committed to the pressure and responsibility of contesting an international championship.

As a concept, it’s very appealing, even if the price is steep. One thing is for sure, however: if you love cars, racing and have the money but not the time, few other clubs offer such a spectacular combination of thrills.

Rival: Ferrari FXX the £1,000,000, Enzo-based FXX offers a similar programme of racing experiences to the 722 GT. Michael Schumacher famously played a part in its development. But with all 20 cars sold out, getting a seat behind the wheel is nigh on impossible.